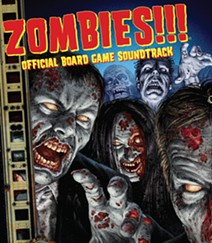 Initially, Midnight Syndicate’s Ed Douglas, who learned to play organ as a child, was interested in film. In 1996, he made a straight-to-video film The Dead Matter, but discovered that he liked doing the music for the soundtrack more than the actual filming.

As a result, he joined up with Gavin Goszka to form the local Goth act Midnight Syndicate, which released its self-titled debut in 1997.

The group has been going strong ever since. Every October, haunted houses, amusement parks, television and radio shows, restaurants use music as part of their Halloween programming. Last year, the group made Morgue Magazine’s "50 Essential Horror Albums - Discs That Created, Evolved, or Defined Genre Music Over the Decades."

"We wanted to design a soundtrack that would not only heighten the Zombies!!! game play experience, but also appeal to all fans of zombies and our friends in the haunted attraction industry," says Douglas in a press release. "I think we were able to achieve that.”

“Given the character and core elements of the game, I think that both of us immediately felt that this album should focus on having a more modern, aggressive sound,” he says. “In order to achieve that, we brought in a lot of electronic and percussive instruments and kept the fundamental game scenarios firmly in mind, approaching it more as an actual soundtrack than as a collection of songs built around a particular theme or setting. While there are a few tracks that are more situation or location-specific, most are intended to evoke the general feel and atmosphere of the game world, allowing you to play along without interruption."

The album is available at MidnightSyndicate.com as well as digitally on CDBaby, iTunes and Amazon.com.