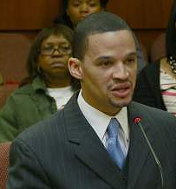 East Cleveland Mayor Gary Norton will face a recall vote in December, one that comes at a time of perilously depleted city coffers and a thick layer of political tension.

"This is a horrible expenditure of funds given the city's current financial provision, and beyond that, switching a single mayor or single councilman will have no impact on the city's financial situation and the city's economy," Norton told Cleveland.com.

With a price tag of some $25,000, the election comes at a difficult time. East Cleveland is well known in Ohio for its wildly mismanaged local budget and the routine news of city equipment falling apart and city services being cut off.

By the same token, residents are locked in an ongoing debate over the possibility of a merger with the city of Cleveland — something Norton once opposed vehemently and now supports heartily. It's hard to separate the special election from that merger discussion, and it'll be worth watching how the vote affects those talks (which, at any rate, aren't off to a robust start).