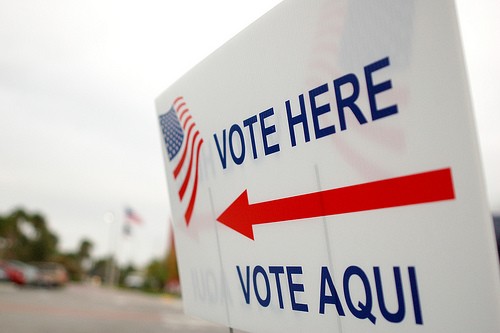 If you remember, Husted's office purged the Ohio voter roll of thousands of voters who hadn't engaged in "voter activity" (classified as registering to vote or voting) in six years, or three consecutive federal elections. The sum total of the purge isn't known. Democrats say tens of thousands. Republicans say far fewer. Purging also includes getting rid of the names of deceased voters or those that have moved out of state. Husted's broader application was what led the ACLU and the Ohio Democratic Party to bring suit against Husted's office.

Originally, Judge Smith ruled in favor of Husted in the case. In September, the Sixth Circuit Court of Appeals overruled his decision, saying Husted had violated the National Voting Rights Act, and sent the case back to him.

In his decision yesterday, he wrote, “There is no dispute that the remedy ordered by this court will not involve the reinstatement of all voters who have been removed from the voter registration rolls.” Basically, any unregistered Ohio voters who were part of the purge and who still reside at the same address where they were previously registered will be allowed to cast a provisional ballot for this election.

Smith's also ordered a 15-percent increase in provisional ballots at each polling location in Ohio.

Husted's response, via the Columbus Dispatch: “Our main concern was to protect the integrity of the election by not having to reinstate deceased voters, those who moved out of state, or are otherwise ineligible. We will fully comply with the judge’s order to count votes of people who remain eligible in their original county and continue to focus on the important work of administering a smooth election."

(Original story 9/23/16): The Sixth Circuit Court of Appeals today reversed an earlier ruling that shot down a lawsuit against Secretary of State Jon Husted. The target of the lawsuit: Husted's process of eliminating the names of registered voters from the state's voter rolls. It's a process called "purging," and it's meant to clean up state databases and delete the names of voters who have moved out of the state or died. It also leaves the door open to negligence and political machinations.

As PBS's Chris Bury once put it, "When it comes to the right to vote, Ohio is a 'use it or lose it' state."

Today's ruling sides with the plaintiffs who brought the case against Husted and originally sought an end to this purging practice.

Husted's policy is twofold: There's the typical matter of comparing voter rolls with the National Change of Address database (and eliminating the names of voters who've moved out of state), and then there's the matter of deleting the names of voters who haven't engaged in "voter activity" for the past two years. ("Voter activity" means registering to vote or actually voting.) Those who fall into that second category are sent a notice and then given four additional years to vote. If after six years there's no "voter activity," that person is scrubbed from the database, despite possibly still being an eligible voter.

Under Husted, there seems to be something of an overreach. It's one thing to get rid of the names of the deceased; it's another thing to just delete countless names of eligible voters from the record. For now, no one can really say how many names have been scrubbed. Estimates vary from "tens of thousands" to "hundreds of thousands."

A Cincinnati Enquirer/USA Today investigation this year raised questions about the murkiness behind the policy. The Sixth Circuit Court of Appeals found that Husted's office is in violation of the National Voting Rights Act. — Eric Sandy