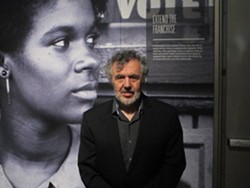 Today, the Maltz Museum of Jewish Heritage opens This Light of Ours: Activist Photographers of the Civil Rights Movement.

The 4,000-square-foot exhibit, which runs through May 14, 2017, features more than 150 black-and-white images by nine activist photographers who documented the clash between “institutionalized discrimination” and “determined resistance by activists and volunteers” during the Southern Freedom Movement.

Created by the Center for Documentary Expression and Art, the Maltz Museum conceived and produced the Cleveland installation’s films, experience and design. Tonight’s opening commences at 6 p.m. with a reception for members that includes a book signing, a performance by Voices of Imani (Imani Temple Ministries) choir and a chance to explore the exhibition with docents stationed throughout the gallery. Admission is $15, $8 for members.

Earlier today, Kelen spoke to us about the exhibit.

How did "This Light of Ours" first come together?
Work on the exhibit began in 2006, in Salt Lake City. We were aiming to organize a display on the Civil Rights Movement for the opening of a new human rights gallery. The city was interested in refurbishing the old downtown library. The Center for Documentary Expression and Art (CDEA) was one of three groups selected to carry that out. We set about designing an exhibit for this new gallery, and it took us a year of trial and error to bring the subject into focus. We eventually selected the idea of an exhibit on activist photographers. We were connected to the featured photographers through our guest curator Matt Herron. He has an agency called Take Stock that licenses the work of activist photographers for media use. Through Matt, we met and interviewed them, and then began the process of selecting from their bodies of work. The photographers, it turns out, knew each other. They have known each other for 50 odd years, though some knew each other better than others.

What did you want to convey with the exhibit?
In fall 2008, I visited an exhibit of vintage prints on the move-ment called "The Road to Freedom." Vintage prints are, by the way, the first or original prints from negatives that remain intact, exhibitable. The High Museum [of Art] in Atlanta had produced the exhibit that used the work of more than 30 photographers. And after seeing the show, I knew this was a display I did not want to repeat. The exhibit was a hodgepodge of powerful, even riveting images, without any defining narrative. There weren’t any histori-cally framing or clarifying vehicles. The exhibit didn’t make adequate distinctions between movement organizations. It was created, in part, because of the curator's love affair with vintage prints. Now, CDEA didn’t set out to be merely didactic, but we did want to create an exhibit that would help visitors better understand this complex and important history.

Talk a little bit about the photographers involved in this exhibit.
Of the nine photographers, at least five came in with significant photographic training. The others became photographers because of the movement. All the photographers saw themselves, however, as activists. They were not fine art photographers in the classic sense. They saw photography as a tool to create change and increase self-reflection within our society. And all of the photographers were fiercely independent individuals. They came into the movement with the commitment and dedication to work for social change. Matt Herron was a conscientious objector and a pacifist. George Ballis served in World War II and came out heavily disillusioned. He liked to say, "The Marines said they would make a man out of me. They did make a man out of me, but it wasn’t their man." Ballis got involved with other social justice movements as well. Maria Varela was partially radicalized by the Catholic Church. They had a program called Young Christian Students in which young people, high school and college age, were trained to do research and look for ways to address social injustice. Japanese-Canadian Tamio Wakayama spent a portion of his childhood in a government created internment camp, where he learned about racial stereotyping. All these photographers were intensely interested in the movement. And the memorable thing about the movement was that it was open. If you showed up in SNCC's Atlanta office and were willing to work and were committed, you could find a spot. They wouldn’t coddle you. This was real work. They provided a modest salary. We tell people this was not a top-down movement. It was a bottom-up movement wherein Dr. King became a spokesperson. Looking at it this way might suggest that there were millions involved, but the core of the movement probably numbered in the thousands. Life in this country was changed by a relatively small group of people—thousands of people in a country of millions. The movement is an extraordinary window into that and into how power was challenged and shifted, and who we are, or what we are capable of doing, as a people. Not only can we destroy each other, but we can transform each other for the better, too.

Talk about the exhibit’s relevance to what’s been happening today.
The one thing I like to talk about, but don’t always convince peo-ple of, is the fact that the movement provides us with tools for so-cial change. As the exhibit research brought me closer to move-ment events, I learned what some of these tools were and how they were used. These photos and even the music—the songs themselves—served as tools for social transformation, which helped activists face the destructive and racist forces in our society. The tools of the movement are hugely critical. The movement culture didn’t necessarily invent them, of course. Some of the songs of the movement and the black churches were already there—but the movement learned how to put them into use for its own goals. The contributions of other groups were evident, too. But here we are now in an acutely polarized moment of time. The brazen killing of young and older African-American men is stun-ning because it is so brazen. Its visual presentation in videos and photos is making everyone stop in their tracks. Martin Luther King knew that oppression worked better when it was covered up. The visual presentation of this today makes us all gasp just as it did then. So the reminder that visual documentation is a key tool for social change is a way the exhibit is relevant.

Now we’re inundated with imagery. Do you think photos used to have more impact?
The availability of image making has definitely cheapened the image, the photograph. Having said that, though, it's important to note that selected photos on a museum wall can work differently. They hold, or stop a moment in time, and they stop you in your tracks, so you can really see what’s there. And if a photographer is capable, he or she can really reveal something in that moment of the complexity of life that otherwise could pass you by.

Arts District This Light of Ours: Activist Photographers of the Civil Rights Movement Maltz Museum of Jewish Heritage