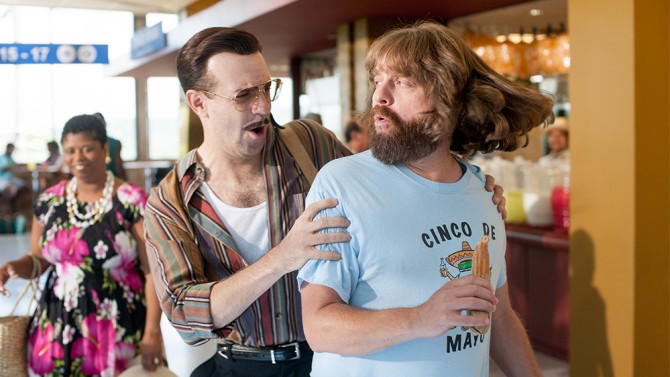 The Pawn, the Brains, the Bait, the Ex, the Law, the Psycho, etc. The posters explained the story of Masterminds, a new heist comedy opening Friday in wide release, much better than we ever could.

Directed by Jared Hess, (the Napoleon Dynamite dude who, for several years, appeared to have the market cornered on eccentric indies), Masterminds is his most mainstream effort yet, bringing the sketch-comedy talents of SNL alums Kristen Wiig and Jason Sudeikis, current cast members (and Ghostbusters stars) Kate McKinnon and Leslie Jones, and free-agent funny men Zach Galifianakis and Owen Wilson to bear on a wacky criminal story based (very loosely) on true events.

Galifianakis is David Ghantt. He's an innocent employee of the Loomis & Fargo armored car company and wears his hair after the fashion of Prince Valiant. When his crush Kelly Campbell (Wiig) is fired from Loomis & Fargo, she and her bad-boy chum Steve Chambers (Owen Wilson) convince Ghantt to help them rob the company, an "inside job." Ghantt is persuaded to lend his access only after Kelly says she'll run away with him to Mexico, letting him escape his deranged fiancee Jandice (McKinnon, whose crazy eyes are deployed to maximal effect in a laugh-out-loud engagement-picture photo shoot).

Chambers begins lavishly spending the fruits of the burglary and, worried that Ghantt will rat out the others when Kelly doesn't join him on the lam, he hires a hit man (Sudeikis) to clean up the mess.

In the manner of movies based on SNL skits, this one features some competent character work — even if these are all variations on themes we've seen these actors play before. (Except of course Owen Wilson, whose performance can't be called a "variation" on anything, because he literally just plays Owen Wilson at all times. Bless him.)

The arc of the story is such that it never feels like it's building to a climax. There's a heist in act one. There's an attempted assassination in act two. There's an attempted rescue in Act three. It's all fairly disjointed and incoherent — and it lacks the charm and original aesthetic of Napoleon and Hess's earlier stuff — but as pure sketch material, it could be a lot worse.