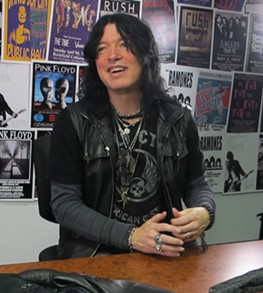 Cinderella frontman Tom Keifer spent ten years working on his solo album, The Way Life Goes, so you can't blame him for spending a couple of years on the road in support of it.

Keifer, who plays a solo show tonight at 8 at the Hard Rock Rocksino Northfield Park, stopped at the Rock & Roll Hall of Fame and Museum earlier today to donate the guitar he used on the Cinderella tune "Night Songs" as well as a top hat and jacket.

Rock Hall President and CEO Greg Harris accepted the donations and took a few minutes to talk to Keifer — both hail from the Philadelphia area. We spoke to Keifer, who said he couldn't think of a better home for his donations than the Rock Hall, and asked him about his decades-long career and how he overcame the vocal paralysis that once made it difficult for him to sing.