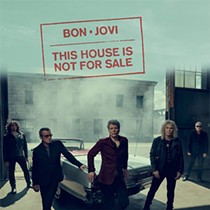 Arena rock acts have come and gone over the past two decades and yet somehow rocker Jon Bon Jovi still manages to be popular enough to fill venues such as Quicken Loans Arena, where he’ll play on Sunday, March 19, when his This House is Not For Sale tour comes to town.

This will be the band’s first outing since Bon Jovi’s 2013 Because We Can World Tour, which, the press release announcing the 2017 tour tells us, was the band's third tour in six years to be ranked the No. 1 top-grossing tour in the world (a feat accomplished by only the Rolling Stones previously).

Fans will receive a physical copy of Bon Jovi's forthcoming album, This House Is Not For Sale, with every ticket purchased.