Coldplay's A Head Full of Dreams Tour Coming to the Q 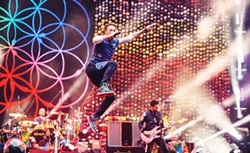 Released late last year, Coldplay's latest studio effort, A Head Full of Dreams, has been a huge hit for the British band.

The videos for the album's hit singles — "Adventure Of A Lifetime," "Hymn For The Weekend" and "Up&Up" — have more than a billion YouTube video views combined.

To date, Coldplay’s A Head Full Of Dreams Tour has attracted some 2.5 million people in Latin America, the U.S. and Europe. Production designers Misty Buckley and Paul Normandale have created a killer light show for the tour. It rolls into Cleveland next year for an Aug. 19 stop at the Q.

Citi cardmembers will have access to presale tickets beginning at noon on Monday. Tickets go on sale to the general public at 10 a.m. on Saturday, Oct. 15, at livenation.com.