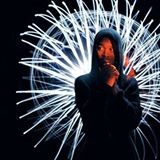 Rapper Kid Cudi might’ve checked himself into rehab, but that hasn’t stopped him from releasing a new music video for “Frequency,” the single from his forthcoming album, Passion, Pain and Demon Slayin’.

The atmospheric song’s lyrics reference “couple girls, couple stories, and a couple ’shrooms,” and the video, which takes place in a dimly lit magical forest, is appropriately trippy.

It features a shirtless Cudi cavorting with half-naked women who randomly break into evocative dance moves throughout the clip.

The album is reportedly delayed due to sample clearance issues, but in his announcement about checking into rehab, the Cleveland native assured fans that “the album is still on the way.”