Is the Steelyard Walmart Still the Worst Walmart in America? (Spoiler: Yes) 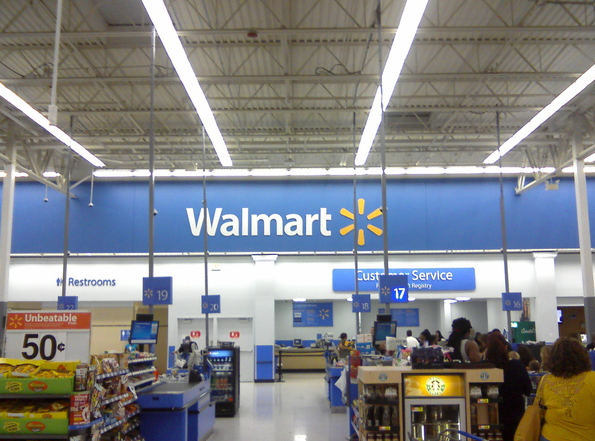 Last September we bestowed the Steelyard Walmart with the title of Worst Walmart in America. It was not a decision made lightly. Nor was it a close call. All manner of incompetence lives in the building (and parking lot, for that matter). The vortex of suck is so strong at 3400 Steelyard Dr. as to threaten to disrupt entire weather systems. The disregard for common human decency so total it inspires fear. The feedback so one-sided one wonders how no one has noticed or rectified the situation. Then again, given that employees and managers at the store are either nonexistent or on their phones, it's not entirely surprising.

But we held out hope for improvement. We thought maybe, just maybe, that our missive would reach receptive ears at Walmart headquarters. That our little award might filter its way to Top Men at the superstore. That someone in charge might say to themselves, "Holy shit, this is bad. Let's fix this."

We should have known better.

One year later, it appears as though nothing has changed and no one cares.

We can't vouch for that ourselves, since we haven't stepped foot in that particular brand of hell since last year. But evidence continues to pile up. It is irrefutable. There are concerns, and there are many. There is woeful resignation. There are pleas for help. There are endless examples. Here are just a few from the last calendar year.

Been on hold with steelyard Walmart 3x and STILL haven't been transferred to electronics. Somebody gone get beat up in customer service

STEELYARD IS THE WORST WALMART EVER!!!!

Hella weirdos in the Walmart in Steelyard like where the fuck is my dad?! Got me down here with the pedophiles.

I am once again located at Steelyard Walmart. Send booze

Up here at Walmart in steelyard with my client. I wasn't hip 😂😂😂😂 #ratchet

Never ever ever going to steelyard Walmart again. SO PISSED

Going to the #Steelyard Walmart makes me want to drink bleach.

About to enter the Twilight Zone....Steelyard Wal-Mart. If I don't make it out, tell my dog I loved him. 😂

When you have to pee but you're at the Steelyard Walmart so you decide a UTI is the better option.

On everything the Walmart at steelyard Commons is the worst Walmart in America.

I go to the Walmart in steelyard and just get dragged into rachetness.

The customer to employee ratio at the steelyard Walmart atrocious

Does Walmart know? Of course they do. Here's an exchange from last summer.

And here are two more from the past month.

@xo_mermaiids We apologize. What is it about the service you have not liked? Please let us address your concerns. -Jerri

This has been your yearly update on the worst fucking Walmart in America.