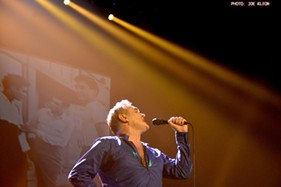 Update: Blaming his management for not providing the funds necessary to complete a tour that included dates in Detroit, Cleveland, Chicago, Houston, Dallas and San Antonio, former Smiths singer Morrissey has canceled his show slated to take place on Friday at the State Theatre.

Originally scheduled to take place on Nov. 25, the show had been rescheduled after a band member became ill. But in a post entitled "There Is a Light That Now Goes Out" on true-to-you.net, Morrissey maintains that management withdrew the funds needed to play the tour dates that were rescheduled in the wake of the collapse of the keyboardist in his backing band.

Refunds  are available at the point of purchase.

Because a member of Morrissey's touring party has reportedly become ill, the former Smiths singer has postponed this week’s shows. As a result, the Friday, Nov. 25, show at the State Theatre has been rescheduled for Friday, December 9. All tickets will be honored for the new date. Tickets are available at the box office and online at playhousesquare.org and livenation.com.

Original Post: When singer extraordinaire Morrissey first arrived on the scene back in the ‘80s with the post-punk band the Smiths, he came off as a throwback. With his crooning vocals, his James Dean-inspired haircut and his contrarian opinions, the dapper frontman was the anti-rock star. He was simply too articulate and too well-kept.


Flash-forward to the present day and Morrissey seems even more out of sync. While many pop stars sing to backing tracks, Morrissey simply sings. And he shows little emotional restraint, gesturing dramatically during live performances with no regard for the fact that those gestures might be better suited to the opera.

And yet, that’s what makes him even more of a singularity in the pop world. Last year in front of a capacity crowd at the Akron Civic Theatre, he lived up to the billing as a pop/rock icon who's in a league of his own.

Moz, as he’s known to diehard fans, will return to Northeast Ohio to perform at the State Theatre on Nov. 25. Tickets go on sale at 11 a.m. on Friday.