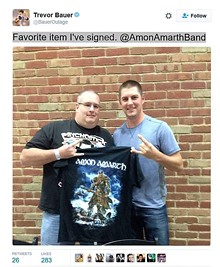 Despite taking the loss in Game 2 of the World Series, Tribe pitcher Trevor Bauer remains one of our favorite players. The guy displays a real intensity both on and off the field.

And now, we have another good reason to like him even more. He appears at the 3:54 mark of the music video for Amon Amarth’s “Raise Your Horns.” It’s just a quick cameo, but you can spot the hurler in his kitchen as he throws devil horns in the air like he just doesn’t care.

Bauer also uses the Swedish melodic death metal band’s tune “The Pursuit of Vikings” as his theme song when he pitches.

In one Tweet, he says the favorite item he ever signed is a fan’s Amon Amarth T-shirt.