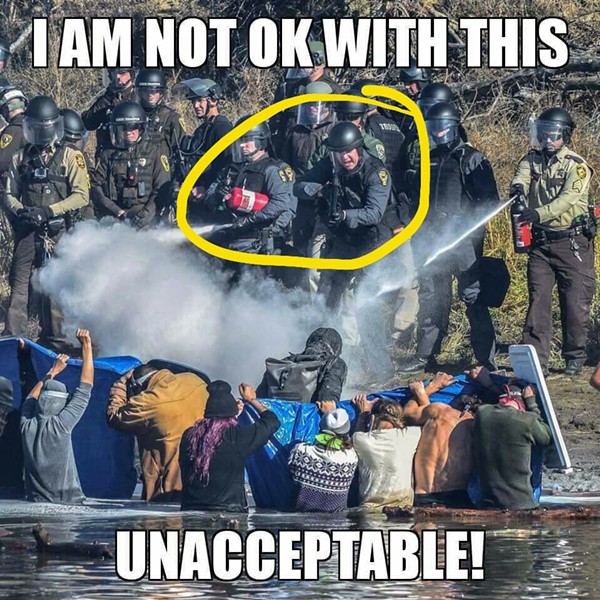 We reported last week that the Ohio State Highway Patrol sent 37 troopers to North Dakota after authorities there put out a call for aid in their ongoing clash with protesters over the Dakota Access Pipeline.

Shortly after that news broke, Ohioans signaled their displeasure to Governor John Kasich in several ways. On Friday, protesters from Dayton and Athens traveled to Columbus to deliver a petition to the Governor, calling on him to bring the troopers home. (As of Tuesday morning, a Change.org petition had garnered more than 45,000 signatures).

"If the governor wants to truly be responsive to an emergency," Antonio wrote, "he need not look beyond his home state. Communities across Ohio are in desperate need of additional resources to combat the growing opioid crisis that has already claimed an historic number of Ohio lives."

Cincinnati's City Council certified their opposition in a letter to Kasich, admonishing him for sending the troopers.

"The images of militarized police facing off against unarmed Native Americans protecting their water and their history recalls back to the worst time period of American history," read the letter, signed by five of Cincinnati's nine city council members, "a time when the Federal government committed genocide against native tribes in an attempt to gain control over their land and their resources."

Cleveland City Council has not addressed this latest development in the DAPL saga, though they did pass a resolution in September standing in opposition to the pipeline.

"We are bound to protect water,” the resolution read. “Just as the shores of Lake Erie are center to life here in Cleveland, so too the Standing Rock Sioux recognize and understand that without water, there is no life."

A Kasich spokesperson dismissed the statewide controversy as so much "cheap, partisan politics" in an "overheated election season.”

Ohio State Highway patrol Lt. Robert Sellers told Scene that the 37 troopers were volunteers from around the state and that there would be no impact on regular operations. For the Columbus Dispatch, Sellers likened Ohio's involvement to other states sending police officers to Cleveland for the RNC.

Sellers wrote Scene in an email Tuesday that Ohio would be reimbursed for its costs by the state of North Dakota, but that the total costs could not be projected until the "support mission" has been completed. He did say that the 37 troopers drove to North Dakota and are now lodged in a hotel. He confirmed that the length of support mission is still "yet to be determined."

The troopers, though, have certainly been active.

Three days after they departed from Dayton, members of the Ohio contingent appeared in a photo on the front lines, aiming guns (presumably with rubber bullets) and hosing protesters in with fire extinguishers.

You know how @JohnKasich sent 37 @OSHP officers to #DAPL this week? Looks like they made it. #NoDAPL #organizeCLE #organizeCBUS pic.twitter.com/zowpcOZuSX


"Appears they jumped right in," said local activist Rachelle Smith, on Twitter, noting that the picture was taken on November 2, shortly after the troopers would have arrived.