Election Day Off to a Bustling Start in Cuyahoga County 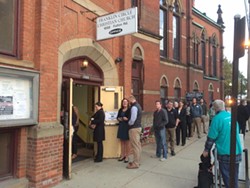 We'll be ducking in and out of various polling places today in Cuyahoga County, but here's a quick morning check-in for you: Lines are robust and swiftly moving, and the general demeanor — at least among a small sample of westside spots we've hit so far — has been pretty cheery. This thing's almost over, folks.

Anything else you want us to keep tabs on?

Know that early voting is down in Cuyahoga County, relative to 2012. The board caught 218,711 early votes this year (as of yesterday), a 16-percent drop from 253,512 in 2012. The polls workers we've spoken to this morning have casually reported pretty good turnout; we'll keep an eye on those numbers as the day comes to a close.

Lastly: If you see something, say something. Let us know how your voting experience was — whether simple, complicated, funny or strange. Send your tales to esandy@clevescene.com.