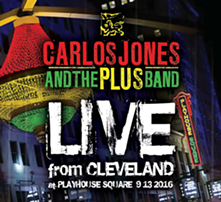 Local reggae act Carlos Jones and the PLUS Band rank as one of the hardest working groups in the region. Now, the band has just announced that this year’s annual pre-Thanksgiving Holiday bash will take place at 10 p.m. tomorrow at the Player's Club at the Lost Nation Sports Park in Willoughby.

Jones has also just recorded a new version of his classic Christmas song, “Christmas the Way It Used to Be.” Produced by multiple Grammy Award Winner, Edwin "Tony" Nicholas (Levert, O'Jays, Back Street Boys), the song shows off Jones’ talent as both a singer and songwriter. The track will be available for download around mid-December on iTunes and Amazon.

Also in early December, locally based Little Fish Records will issue Carlos Jones & the PLUS Band LIVE from Cleveland. The album will be available at live shows and on the Little Fish Website. Jones recorded the album at an outdoor show at Playhouse Square this past September.

Jones is also slated to perform at the annual "Holiday Revival" show at Music Box Supper Club on December 26. Two days after that gig, Jones will perform in Pittsburgh with former Rusted Root drummer, Jim Donovan and the Sun King Warrior's at Jergel's Rhythm Grille in Warrendale, Penn.

C-Notes Carlos Jones & the PLUS Band