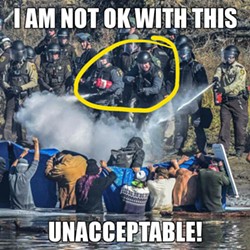 The Ohio State Highway Patrol confirmed to Scene this morning: All troopers who were sent to North Dakota last month to assist with law enforcement at sites around the Dakota Access Pipeline have returned.

The troopers' last day of work in North Dakota was November 14, Lt. Robert Sellers told Scene by email. They departed the following day and arrived home on November 16th.

That means that OSHP troopers were not a part of the clash between protesters and security forces on the night of November 20/21, when an estimated 300 people required medical treatment as a result of police violence. The most severe, and most publicized, injury was that of 21-year-old Sophia Wilanksy, who's arm was seriously injured, witnesses say, when police hurled a concussion grenade at her. Police dispute that story. They say Wilansky's arm was injured when a rigged propane cannister exploded in her hand.

As a result of the violence, the Army Corps of Engineers has decided to shut down the Standing Rock camp and open a "Free Speech Zone." The Corps delivered a letter to the Standing Rock Sioux Tribe Friday. The decision was met with anger and disappointment by the Native Americans and environmental activists who have been encamped there for months.

As for the Ohio troopers, it's unclear how much their excursion cost, but Lt. Sellers confirmed that all costs would be reimbursed by the state of North Dakota, but that the figure is unavailable at this time.