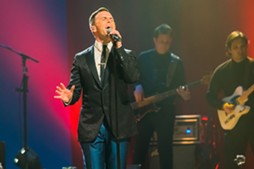 Singer and actor Daniel Reichard, who grew up in Rocky River and attended St. Ignatius High School, says he dreamed about becoming a Broadway star from an early age.

“I grew up with a flair for the dramatic,” he says in a recent phone interview, adding that he was the eighth of nine kids.

Reichard brings his Home for Christmas concert to Music Box Supper Club at 7:30 p.m. on Thursday, Dec. 22, and Friday, Dec. 23.

“Right away, my family could tell there was something distinctive about my personality," he says. "When I learned how to read, I would even adopt different accents. When I was in grade school, I wanted to be a Saturday Night Live performer. I idolized Steve Martin. I thought I would be a comedic actor. When my voice changed, and I could sing, that was when the focus shifted toward Broadway musicals. I took to it like a duck takes to water.”

After high school, he headed to the University of Michigan’s School of Music and moved to New York where he made his Big Apple debut in Forbidden Broadway.

“When Forbidden Broadway came along, I thought it was a New York institution in the theater,” he says. “I was the newbie when I joined the cast. It definitely got my career going. I started my first three or four years in the off-Broadway scene which is really cool stuff. I would guest at various concerts too, and that got my name out there.”

He then portrayed artist and social activist Keith Haring in the musical Radiant Baby. That was a major break.

“That was my first really big starring role in New York,” Reichard says. “He’s such an iconic artist, especially in New York. I was young, and it was a major director, George C. Wolfe, behind it. He’s iconic himself. That was a maturing experience. That was something that taught me what show business is about and showed me the challenges of bringing a new show up in New York. I really learned about life.”

Director Des McAnuff, who had seen Reichard in Radiant Baby, asked him to audition for a new play about the vocal group the Four Seasons.

“He said he wanted to work with me, and that’s how we got going,” says Reichard. “I read from the script and the part was mine. It was the easiest audition I ever had. There was something so uncanny about [the Four Seasons'] Bob [Guadio] and me. When we stood next to each other we could have been father and son.”

The resulting musical, Jersey Boys, opened at the La Jolla Playhouse and then moved to Broadway where it has become a record-setting smash hit. With his Jersey Boys co-stars, Reichard then formed the vocal group, the Midtown Men, which has performed over 600 concerts worldwide. The group has also recorded two albums and produced two public television specials.

“That’s been amazing,” says Reichard when asked about the group. “It’s my proudest accomplishment. We dreamed this up ourselves and worked hard to make it happen, and we’ve played prestigious stages like the Beacon and the Kennedy Center. We write, choreograph and direct it. It’s enlightening to learn about being an entertainer. You speak to the audience, and you entertain as yourself. It’s incredible to know what it’s like to own a business. It’s been very, very cool. We’re performing all the time. We’ve played almost every single city except Cleveland. One of these days, we hope to play there. I hope it’s while I’m still in the group. ”

As a solo artist, Reichard has played dozens of sold-out engagements all over New York City, where he resides.

Home for the Holidays, a special two-night stand at the Music Box Supper Club, stems from Reichard’s holiday show he has turned into an annual attraction in New York. Last year, for the first time, he brought the show to Cleveland. This year’s incarnation will feature holiday favorites such as "Winter Wonderland," "Have Yourself a Merry Little Christmas," and “Do You Hear What I Hear?" Reichard will also incorporate Hanukkah songs and Broadway tunes.

“I started it to express myself outside Jersey Boys,” he says of the holiday program. “I wanted to put my energy into something different. I love Christmas and come from this big family. The show is about my life growing up in Cleveland because the nostalgia comes from my childhood. This year, we want to bring it back. We do the traditional ballads and fun rousing renditions of ‘Winter Wonderland’ and Stephen Sondheim songs. It’s a very eclectic set list that appeals to different ages and people with different tastes in music. It’s family friendly for Cleveland. I tend to be naughtier in New York.”

He sees it as a way for music fans to unwind after a difficult year.

“No matter if you celebrated or were disappointed in November, everyone would agree we’re in such a divisive time,” he says. “I want my show to be not just an escape but an evening of inspiration to bring the spirit of the holidays to our everyday lives, so we can remember what it’s all about. I have a great passion for the season.”