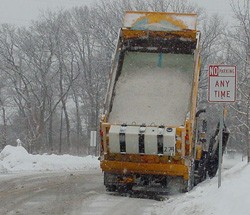 Staring the first major snowstorm of the season straight in the eyes, East Cleveland kind of shrugged. There wasn't much it could do, after all. Both of its salt trucks were out of service, and the perpetually broke city was still working to get them fixed.

That was a couple of days ago.

After last night's storm, the good news is that East Cleveland now has two salt trucks in operation. No, those aren't the ones they were fixing, of course. No, ODOT has lent the cash-strapped city two salt trucks to service roads in the meantime. So, there's that. Happy sledding.

(Original story 12/13/16): Wither winter weather already underway in earnest on the east side and more to come soon, it's probably not great that East Cleveland doesn't have any working salt trucks right now.

According to the city's website, both of their salt trucks are currently out of service with electrical issues. Only one truck is being repaired in-house and has the possibility of being available in time for the winter storm heading our way. The other will be repaired over the weekend.

East Cleveland could get at least half a foot of snow.

This has been your periodic update that East Cleveland can't afford things.