Could a College Team Beat the Browns? Probably Not, But It's Happened Before 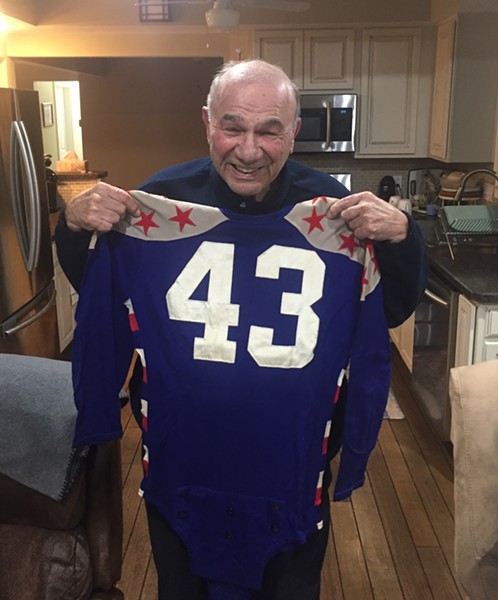 Every year, once the Browns' season becomes yet another historic failure, Clevelanders and some media members engage in an idiotic conversation: Could Alabama or Ohio State or some other college team with a high number of prospective NFL draft picks beat the Browns? The answer is becoming less obvious: no, they could not. The Browns, by definition, have an entire roster of professional players. Ohio State, at its best, has 20 NFL prospects. Still, a recent survey by Public Policy Polling found that 62 percent of polled Ohioans thought the then No. 2-ranked  Ohio State Buckeyes would beat the hapless, winless Cleveland Browns.

On Aug. 12, 1955, Sam Palumbo was on the most uncomfortable plane ride of his life. From wheels up in Chicago to touch down in Cleveland, the Collinwood High School graduate sat silently in the back of the Cleveland Browns’ plane. At the front, Browns head coach Paul Brown silently boiled with frustration. That’s because the dynastic NFL Champs had just lost to the 1955 College All-Stars. And while the Browns had drafted Palumbo in the fourth round of the draft in January out of Notre Dame and the other passengers were technically his teammates, on this day they hadn’t been — Palumbo was the collegians’ starting middle linebacker.

“You could hear a pin drop,” says Palumbo, now an 84-year-old Highland Heights resident. “I was the only guy on the plane that won.”

From 1934 to 1976, the Chicago Charities All-Star Game opened each NFL season. The exhibition contest, founded by Chicago Tribune sports editor Arch Ward, pitted the reigning NFL champions against the previous year’s best college seniors. The pros typically won, particularly in later years, but a rare few games, nine total, went to the collegiate teams. One such game was in 1955 against the Cleveland Browns.
A month earlier, Palumbo reported to Hiram College for Browns training camp. He spent a week getting acquainted with the organization before heading off to Chicago to start a three-week camp with the College All-Stars.

When he arrived in Cleveland, he expected to find a well-oiled machine. The 1954 season ended with the Browns stomping the Detroit Lions 56-10 at Municipal Stadium for a second NFL Championship. Hell, they’d made the championship game every year since joining the NFL in 1950. Instead, Palumbo found a squad that lacked identity.

For the past nine seasons, that identity had been quarterback Otto Graham, one of the most dominant athletes of his era. After the 1954 season, however, the 34-year-old three-time MVP announced his retirement, handing the offense to an inexperienced George Ratterman.

That change made Palumbo see a possible opening for the All Stars.

“They don’t have a quarterback. Otto was 90 percent of that team,” he told his teammates when he arrived at All-Star camp at Northwestern University. “We can beat these guys.”

Palumbo’s inside scoop from Hiram wasn’t the only buzz at the All-Star camp. Led by Ralph Guglielmi, the All-American quarterback from No. 4 ranked Notre Dame, and Alan Ameche, a Heisman Trophy winning running back from University of Wisconsin, the roster was solid. The talent also extended past the players on the field.

The All-Stars hadn’t beaten the pros since 1950. To make the game competitive again, Ward tapped longtime Green Bay coach Curly Lambeau to match wits with Paul Brown. Also breaking with tradition, Ward set up a scrimmage before the matchup with the Browns between the All-stars and the Chicago Cardinals. Propelled by six interceptions and a late field goal, the All-Stars won 9-6. Passing their first pro-level test solidified what the collegians already knew: They could beat the Browns.

Back in Cleveland, Brown was calling the game “one of the most important contests of the year.” Although the Browns were 12-point favorites, the All-Stars’ victory shook the coach. He grew paranoid and accused the All-Stars of spying, the Plain Dealer reported.

“He always worried about spies,” Palumbo says. “We used to practice at League Park. One time there were guys working on the roof across the way. He sent the equipment manager up there because he thought they were spies.”

The Cleveland coach announced the game wouldn’t be used to evaluate newcomers, as it often was, and instead the veterans would “play the majority of the game,” which “would not be treated like an exhibition.”

“Paul wanted to win every game,” Palumbo says. “But I think he really wanted to win this one to get off to a good start and show the guys that they could win without Otto.”

In front of 75,000 fans and a national television audience, the College All-Stars stormed Soldier Field. Tad Weed, Ohio State’s kicking specialist (a rare role for the time), struck first with a 21-yard field goal. Ratterman shot back with a QB sneak from the goal line — 7-3 Browns. The shootout went back and forth all game. Ratterman had a decent first half, throwing a touchdown just before half time to go up 20-17, but fell stagnant in the second half. Tad Weed hit two more field goals, including the deciding points of the game. The Browns scored with two minutes left in the fourth, but it was too little too late. The amateurs had won 30-27, thanks to the airborne attack by Guglielmi, the game’s MVP, and a rumbling 200-yard rushing day by the running back corps. (You can watch highlights of the game here.)

“They got us. That’s the only thing to say,” Brown told the Plain Dealer after the game. “We were outplayed and soundly defeated. They had a great bunch of running backs and fine coaching, and earned everything they got.”

Bottles were popped and palms were slapped in the All-Stars’ locker room, but the party was short-lived for Palumbo. He wanted to go out and celebrate with his teammates in Chicago, where Notre Dame players were celebrities, but Brown had other plans for him. As he flew back to Cleveland, the coach was second-guessing his team.

“We played the All-star game with our veterans, but from now one we’ll be taking a long look at the newcomers,” Brown told the Plain Dealer on Aug. 15. “I thought we basically had a sound defense back,” he went on to say Sept. 10, “and it was taken apart by the College All-Stars.”

As Brown reevaluated his defense, he saw a hole at linebacker, Palumbo says.
At this point, Palumbo was not guaranteed a contract. NFL teams in 1955 only carried 35 players, and making a team like the Browns, which had little turnover year to year, was a feat for a fourth round draft pick, Palumbo says. Brown’s reevaluation coupled with a solid performance against the Browns and a newsworthy preseason earned Palumbo a spot on the 1955 Browns as a back up linebacker.

Though Brown publicly supported Ratterman, saying he did “a pretty fair job” against the All-Stars, the coach needed Graham. So Brown, who also served as general manager, lured him back with an NFL-high $25,000 contract. For comparison sake, Palumbo’s rookie contract was $7,000 a year with a $200 signing bonus. Still, Palumbo believes it was more than money that drew Graham out of retirement.

“Otto loved Cleveland,” Palumbo says. “He loved the guys he played with and felt that he should be back playing again. So he did, and he won the championship again in 1955.”

The very same year the Browns lost to a college team, they went on to win a third NFL championship. Palumbo, who replaced an injured Chuck Noll, played hero in the game by snagging a dagger interception in the third quarter, sealing a 38-14 win against the L.A. Rams.

“It felt really good because I was from Cleveland and my family and friends were there,” he says. “It was probably the highlight of my career.”

Graham, for his part, retired after the 1955 season and coached the College All-Stars to their last victory in 1963, before the game was discontinued in 1974.

Palumbo played one more season in Cleveland before he was traded to the Green Bay Packers. In 2016, his career from Collinwood High School to the NFL was honored with an induction into the Cleveland Sports Hall of Fame.

The argument once settled on the field is now debated from barstools. Could a college team beat a pro team? Even with an all-star team of college players, even against the worst team in the league, Palumbo doesn’t think so — but not for the reason you might think.

“I just don’t think a college team would really play hard and make a commitment. There’s too much money to be made,” he says. “If you’re a first round pick from Alabama, do you want to take that risk? I don’t think so. But we did it. So maybe it could be done.”