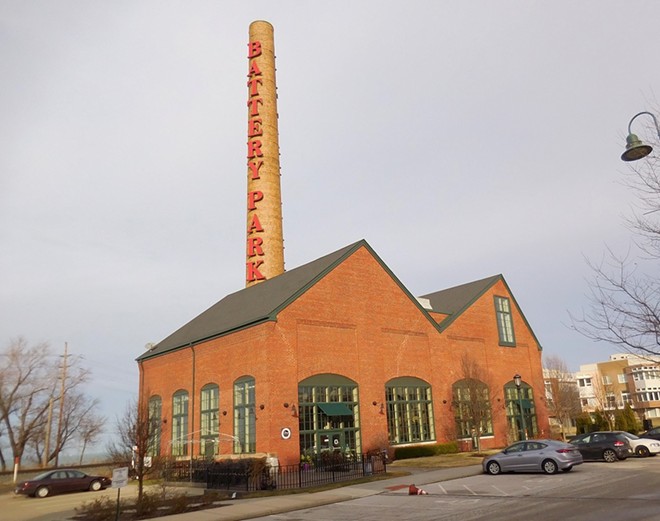 Since the Battery Park neighborhood was developed more than 10 years ago, the eastern half of the historic smokestack-topped powerhouse building has remained vacant. That changed this fall when Terrestrial Brewing Company (7524 Father Frascati) began construction within those red brick walls. The project, more than two years in the making, will cross the finish line as soon as April, according to partners Ryan Bennett and Ralph Sgro.

Sgro, who is the brewer, was the opening general manager at Platform Beer, where he helped finish construction of that space and get it up and running.

“Since I started home brewing, this has been a dream of mine,” he says. “And my experience at Platform increased my confidence that with the right people I could come up with a great concept.”

The owners were attracted to the building, its location, and the proximity to Edgewater Park. The industrial building, formerly part of the Eveready Battery complex, has exposed brick walls, open rafters and unobstructed views of Lake Erie. But what appeals most to the owners is the number of current and future residents in the immediate area.

“We had the opportunity to go out to Portland, Oregon, to do a workshop with Portland Kettle Works [the brewing equipment manufacturer],” Sgro says. “Just seeing the beer scene there, it was very similar to Cleveland. All these breweries pop up all the time there and it seemed like each brewery had its own little neighborhood that made it their own.”

The 2,800-square-foot space will feature a unique layout, in which all the brewing equipment will be installed right down the middle of the room. Guests will be able to sit at a counter positioned immediately next to the brewhouse and the fermenters. All the plumbing and connections will be in plain sight.

“People can literally sit right in front of us while we brew and ask us questions,” the brewer notes. “We really want people to be involved in the process – to see, smell and understand the entire process.”

A rear bar will be located in front of the cold storage room, where kegs and bright tanks will supply the taps with fresh beer. The team plans on opening with eight of their own beers on tap. Most will be ales, and some will be one-offs and small-scale experimental creations like single-keg infusions.

“I want to brew things that excite me, to come up with wacky concoctions that take the experimental route,” Sgro adds. “One of the reasons I went with a five-barrel system is because it kind of has that homebrew feel to it. It doesn’t feel mass produced.”

The 95-seat taproom will be pet- and family-friendly. There will be no kitchen, instead the brewery will take advantage of the myriad restaurnts in the immediate vicinity like CHA Pizza Kitchen, Graffiti, Vita Urbana, Local West and Banter. A large wraparound patio is being constructed that envelops the north and east sides of the space.

Bennett and Sgro see nothing but untapped potential for that neighborhood, where new buildings seem to go up weekly. It is those residents that they will focus their attentions on from the start.

“We don’t want to fight over shelf space or anything like that,” Sgro says. “Initially, we want to drive people to this neighborhood. Cleveland is growing more passionate about beer. I’ve seen a growth in people who want to drink local as opposed to mass market stuff. We’re not here to make millions of dollars, we really just want to make our imprint in Cleveland doing high quality beers that excite us and better the Cleveland craft beer community.”