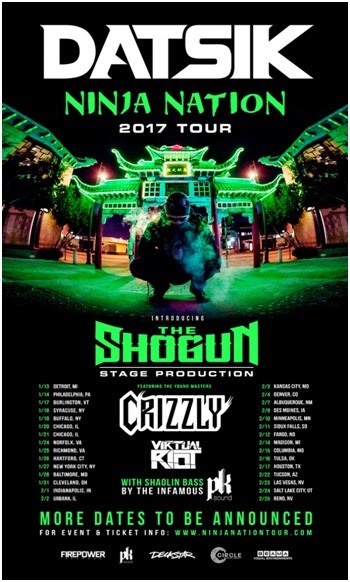 Last year, Troy Beetles, a Canadian producer and DJ who records as both Datsik and Ephwurd, brought his Spring Loaded tour to House of Blues. It featured a massive sound system and light show.

This year's tour will be even bigger. As Datsik explains in a phone interview from a Burlington tour stop, the Spring Loaded tour only helped pave the way for his extravagant Ninja Tour 2017, which includes a stop at House of Blues on Jan. 31.

“It was dope,” he says when asked about last year's jaunt. “I got to travel with my buddies Ookay and Drezo, and it was pretty awesome. We had a super good time it was five weeks, and we ran minimal production, so I could save up for this tour. It was a bit more crazy only in terms of it being intimate and turning into a house party. We had waterguns and would have fun with it.”

The Ninja Tour comes in support of his new Sensei EP. The tour and the EP both have an Asian theme.

“I’ve always been into Ninjas and Japanese culture,” says Datsik. “It’s based on a sensei who becomes a cartoon character that embodies the EP and the stage is a dojo. It has lights and LED tape. I also have this facemask designed by the same people who did Spiderman and Thor. They did a scorpion mask combo that’s all LED-ed out. Somehow all this was meant to happen this way because of my past influences and where everything came out.”

The album’s first single, “Just Saiyan,” starts with grinding white noise before more stereotypical drums and bass kick in. The song's stuttering percussion and atmospheric moments make it sound a bit like a soundtrack for a postmodern sic-fi flick.

“That track is based off [the anime series] Dragonball Z,” says Datsik. “I take two of my favorite characters, and they’re powering up right before the drop. The reference is kind of subtle, but that track is fun. I made it a while ago. It was the one older song. I was at four or five tracks into the EP, and then it came to seven and I banged out three new tracks. I was working 18 hour days for two weeks to get it all done.”

As a youth, Datsik initially developed an interest in hip-hop. He then gravitated to bass music and started producing what’s commonly called dubstep. During the course of a career that stretches back nearly ten years, he's collaborated with the likes of Excision, Diplo, Infected Mushroom and Korn. A major talent in the EDM world, he’s remixed songs from Kaskade & Skrillex, MGMT, Linkin Park, M83 and Wu-Tang Clan.

He credits his dad with pointing him in the right direction. He never played any instruments growing up, but his dad was an audiophile who had tube amps, high-end audio gear and “wicked turntables.” Obsessed with acts like Wu-Tang Clan and Xzibit, he acquired a copy of the digital audio workstation FruityLoops when he was 14 years old and started experimenting with it. Using a friend’s turntables, he started mixing drum and bass and breakbeats and would spin for hours. When Excision, another local dubstep artist based in Kelowna, British Columbia, started throwing parties at Elevation, a popular club night, Datsik sent him tapes in the attempt to get on the bill.

“I was always into hip-hop and playing house parties,” he says. “I started making dubstep without ever hearing it and then friends said it sounded like dubstep. They pointed me in a direction and I found an online forum, and that was it. I met all my favorite producers. I found out who Excision was, and that he was throwing these parties in Kelowna. I told him that one day I would do a track with him. I sent him [the track] ‘Nuke Em,’and that was it. He loved it. At that point, it was so cool because there weren’t any boundaries or sounds that had been explored yet. It would transform and absorb other types of music like trap. Now, it feels like a giant fusion but then it was just straight up dubstep.”

Datsik and Excision became friends and collaborators, releasing several tracks together on Excision’s Rottun Recordings. Back in 2012, Datsik issued his first studio album, Vitamin D. It features guests such as the production duo Infected Mushroom and DJ Z-Trip. For the subsequent tour, he partnered with veteran DJ Steve Aoki, who showed him the ropes.

“We became good friends,” says Datsik. “It was really fun. He’s a super cool dude. We got to travel around. We did a lot of interviews. It was the first time I had been in the spotlight. He’s good at handling himself in press situations. He was plugging his album. It was a great experience. He’s a great performer. I would jump in the rafters with him during his sets and do this random stupid shit. That’s where the ‘Spring Loaded’ tour got its inspiration. It was quick to set up and tear down and we took a giant sound system with us.”

For last year’s Darkstar, Datsik says he sought to embrace hip-hop. The album opens with the punishing “Tantrum,” a song that features booming bass and aggressive vocals courtesy of guest Trinidad James, who freestyles on the track. “Get it moving, moving, moving,” he intones. It’s primarily a hip-hop record, and the clothing and accessory line Famous Stars and Straps hooked Datsik up with [Blink 182 drummer] Travis Barker, who plays on the title track.

Even though the track features a dense array of electronic beats and crooning vocals courtesy of LIINKS, Barker’s drumming manages to be discernable. “No Mind” features all kinds of headphone candy, including metallic-sounding percussion and woozy, demonic sounding vocals; guest Armanni Reign provides the vocals for “Let ’em Know,” a rousing number that would rile up any audience at a sporting event.

“It’s a big system,” he says. “It’s about 100,00o watts. It’s really loud. I don’t think we can always use the whole thing. We try to force it because it’s what kids are there for. For me, I would rather have the sound banging. I hate it when you have to sacrifice sound. I try to get as much of the system into the clubs as I can.”