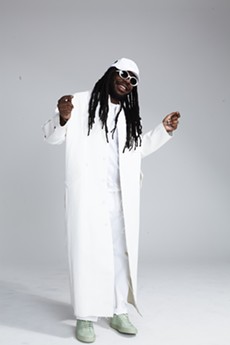 Back in 2015, D.R.A.M. (an acronym that stands for Does Real Ass Music) went viral with his hit song "Cha Cha." Everyone from Beyonce to Snoop Dogg and Chance the Rapper sang the praises of the infectious jam.

D.R.A.M., who sings, raps and also produces, possesses a love for performance that speaks to his various influences that include both artists of yesteryear and acts still performing today.

"My original source of influence will have to be the Parliament-Funkadelic wave," D.R.A.M. says in a phone conversation. "George Clinton the GOAT, Bootsy Collins, Garry Shider, Catfish Collins and so forth. There's also the other artists that were inspired by them as well like Queen Badu, 3 Stacks, Bilal and D'Angelo. Then there's Curtis Mayfield. I was in love with the SuperFly soundtrack. I just call it the good stuff. "

D.R.A.M.'s personality is warm, friendly and inviting. In fact, his latest album cover features him alongside his golden doodle named Idnit.

"I guess so," he says when asked if he's always been such a fun guy. "To be honest, it's like a love and hate thing. People either love me or hate me. I like it that way. I don't want any in-betweens. The people that rock with me, just rock with me. I like to be likable because I like to be around people that I like. I think by exerting good energy and a good vibe, it comes back to you."

Before his big break, D.R.A.M. worked at Best Buy as a member of the Geek Squad. There were culture clashes between him and the rest of the staff. He recalls a time when his manager gave him an ultimatum which ultimately resulted in him leaving the job behind in search of greener pastures in music.

"Yeah man, they told me either I quit or they were going to fire me," he recalls. "Basically, they were trying to dick me out of my severance pay, but I don't need that shit now. I had to leave anyway because I had to go to CMJ [Music Marathon] 2014. So they were going to have to let me go anyway."

D.R.A.M. has released three commercial works to date. A sample used on the original version of "Cha Cha" couldn't be cleared, so that song was altered some for #1EpicEP. He speaks proudly about his projects with an appreciation for the importance of each of them.

"#1Epic EP was a consolidation of the #1Epic Summer mixtape which was literally like none other," D.R.A.M. says. "It was like the brainchild that started all of this. It was me and my boy Gabe just making music at will, and we were just inspired by so many things. Gahdamn! was more polished, but it also had a sound that was like one flowing thing because it was produced entirely by the Social Experiment, Gabe Niles and myself. It was more like a joint project or a collaborative effort. Big Baby D.R.A.M. is literally my life from the point when "Cha Cha" took off up until now and the shit I've been dealing with in between. There's little flashes of when I was in love. That's why you get the love songs at the end. It's kinda like Tarantino-style, where there's not a real timeline for the project, and it just feels like it all kind of flows that way. "

This past summer, D.R.A.M. struck gold with his massive hit song "Broccoli," which eventually peaked at No. 5 on the Billboard Top 100 and was certified double platinum. The success sent D.R.A.M. into overdrive to get his latest album out.

"That's kinda what happened," D.R.A.M. admits. "People were like 'Bruh, you gotta drop an album to attach to this monster record.' We ended up having other bangers as well, but 'Broccoli' is clear as day like out of-fucking-here. Middle America is onto it, like everywhere I go and perform it, everyone knows all the words. It's like a festival anytime we do it. I'm so thankful. I thank the Lord, and I thank the people that this has happened."

The Lil Yachty-assisted "Broccoli" wound up garnering a Grammy nomination for Best Rap/Sung Performance, and D.R.A.M. is ever grateful for the honor.

"That was like a lifetime achievement," D.R.A.M. says. "Ever since I could remember I've been wanting to do this music. All my life I've been watching the Grammys, especially the hip-hop and soul categories and to see who wins Album of the Year and all that. So to even be considered this early into my career, to have such an honor — it's incredible because I can say 'Grammy-nominated D.R.A.M.' like people say 'Dr.' or something like that. It's a blessing. To win would be even more lit, but I feel like this won't be my last nomination because we're gonna keep these wheels turning."

The song even resulted in a short promotional clip for PETA that played around with the broccoli metaphor — in the video, D.R.A.M. hooks up his homies with some pounds of greens that he got from his latest connect who just happens to be a white-haired old lady at the market.

"My manager Tunde already had a connection with the PETA offices," he says. "His other client, Raury, is all about the vegan life, and he does things with them. Even though I'm not vegan, they asked how I would feel about doing the campaign. I said, 'Of course.' It was a no-brainer. I thought it would be cute, and it turned out really well. People from PETA were at my Norfolk show where their headquarters is at, and it was lit. I love to love. They're a massive organization, and the fact that they were rocking with me is incredible. "

The Big Baby D.R.A.M. Tour comes to Grog Shop on Wednesday. As for the future, D.R.A.M. just plans to keep the pedal to the metal.

"Just keeping this Big Baby D.R.A.M. show on the road," he says. "The American tour ends on Valentine's Day. Then, a few days later, we go straight into Europe until the beginning of March. Then maybe we'll have some time to record."