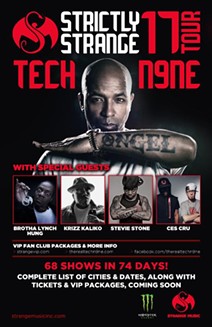 Rapper Tech N9ne (Aaron Dontez Yates) has played Cleveland numerous times over the years, often at the now defunct Peabody’s, a venue that hosted metal and hardcore as much as hip-hop, and recently at the Odeon.

Released late last year, Tech N9ne's latest effort, The Storm, debuted as in the top ten on the Billboard 200. The label plans to release 13 albums in 2017.

Strange Music also just released a new tour video to spread the word about the tour. We've posted it here: