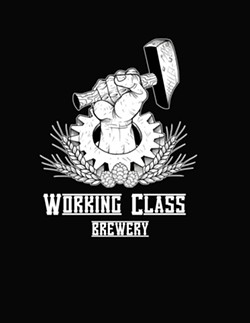 The former Cleveland teacher and band director is currently building out a 3,600-square-foot space in Kamm’s Plaza. The rear third of the property will be home to the 10-barrel brewhouse and six fermenters. The front two thirds will be the site of the 70-seat taproom. There will be no kitchen; guests will be invited to bring in food from area restaurants if they wish.

Skains says that as an avid homebrewer with summers off, he began working part-time at local breweries like Rocky River and Fat Head’s. He ended up staying on for five years.

“I’m at the age where I’m transitioning from one profession to another and it really only makes sense to be an owner,” he says.

Working Class initially will produce five year-round styles, as well as seasonals and experimental one-offs. Beers will be sold onsite, but also canned and kegged for regional distribution. Customers can look forward to West Coast red, blonde, fruit beers and an IPA to start.

"I have to design my beers around what’s going to be available on the hop market,” he explains. “I’m not going to go design a beer around scarce and pricy hops. I don’t want my recipes changing every few months because something isn’t available.”

After considering spots in Ohio City, Skains said that he decided to go where he would be the only game in town (at least for the time being).

“There are two ways to go: you open up where there is a lot of foot traffic from people who are looking for craft breweries or find your own area to work,” he says.

Skains takes delivery of his equipment in mid-February. The hope is to be pouring beers before the end of March.