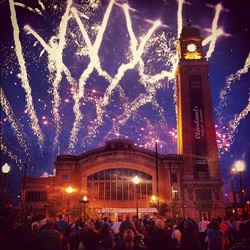 Less than a year after opening to Sunday shoppers, the West Side Market will tweak its operating hours slightly, the City of Cleveland has announced.

"After reviewing and monitoring activity within the market on Sundays," the city said, "along with the people-counter reports, most of the activity began as early as 10:00 a.m. and diminished significantly after 4:00 p.m."