Actually, Cleveland Has Been a "Sanctuary City" Since 1987 According to a City Council Resolution 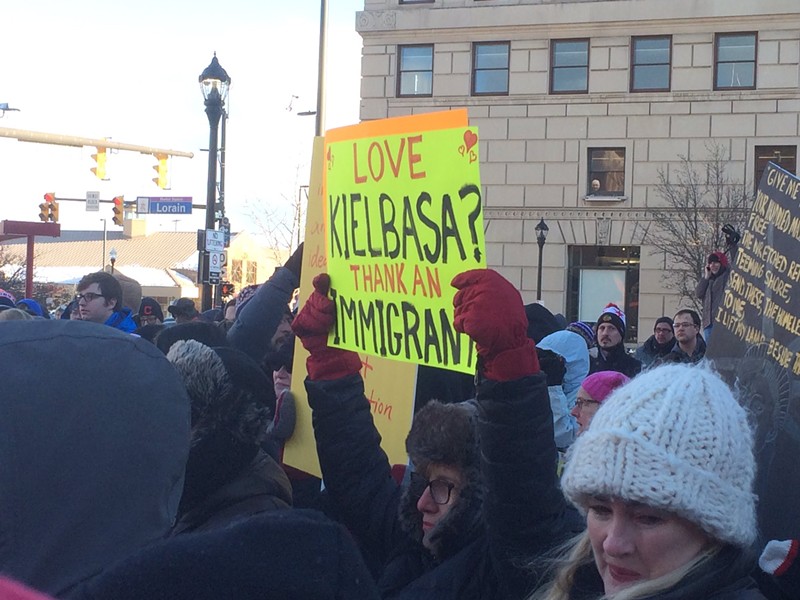 Cleveland City Council passed a resolution in 1987 naming Cleveland a "Sanctuary City" and urging the state of Ohio to become a state of refuge.

The legislation, (No. 777-87), was introduced by Councilman Dale Miller, who is currently a Cuyahoga County councilman, and was passed on May 18 of that year. It was then vetoed on May 27 by then-Mayor George Voinovich.

In a letter he wrote to Robert Brown, then the district director of the Immigration and Naturalization Service (and CC'd to the United States Attorney General at the time, Edwin Meese), Voinovich said he worried that the resolution would create the "false impression" that illegal immigrants would be immune to Federal prosecution.

But this was during the tumultuous conflicts in Central America, and thousands of refugees were fleeing from the countries of Guatemala and El Salvador, in particular. City Council, led by Council President George Forbes, stood its ground. They overrode Voinovich's veto in a decisive 18 to 1 vote on June 8. Though the legislation was reduced from an ordinance to a resolution, it is still by all accounts in effect.

"Technically, we already are a Sanctuary City," said Councilman Zack Reed. He told Scene he intended to speak on the matter at Monday evening's City Council meeting. He said he was animated by what he regarded as the brazen actions of President Donald Trump and the rhetoric from Ohio Treasurer Josh Mandel.

Mandel will challenge Senator Sherrod Brown in the 2018 US Senate race. On Monday, he threw his weight behind a bill that would ban "sanctuary cities" and would hold local elected officials criminally liable for crimes committed by undocumented immigrants.

Reed said he was seeking information from the city's law department about the routes Cleveland might take to assume Sanctuary City status when he learned of the 1987 legislation.

Though this took place nearly 30 years ago, several current council members were serving at that time: Jeff Johnson, Kenneth Johnson and Mike Polensek all held council seats. Polensek, notably, was the lone nay vote in last week's symbolic resolution denouncing Trump's travel ban and naming Cleveland a "Welcoming City." Back in 1987, he walked out before the official vote to overturn Voinovich's veto. He and former councilman Jay Westbrook were the only councilpeople whose votes weren't tallied. (There were 21 councilpeople at the time.)

—
CORRECTION 2/10/17: Councilman Mike Polensek said he did not "walk out" before the Voinovich veto vote on June 8, 1987. He can't recall the exact reason why his vote wasn't tallied, but he said there would have been a reason for his absence — possibly even the death of a grandparent. Polensek said he takes his council attendance very seriously and would never have "run from" this particular issue. He confirmed he was aligned with George Voinovich at the time, who was concerned about undocumented immigrants, and objected to the language of the resolution. But he contended, then as now, that the city has more important issues to be worrying about.

"I'm a councilman," he told Scene, "not a congressman. I'm not here to score points. But I did not 'walk out' of that meeting."

The veto vote below merely puts Polensek's name under "not answering roll call."
—

They all had a hand, back in the '80s, in making sure that refugees facing "tremendous danger and hardship," those fleeing wars that had been illegally financed and coordinated by the United States government, could find refuge in Cleveland, Ohio.

But everyone seems to have forgotten.