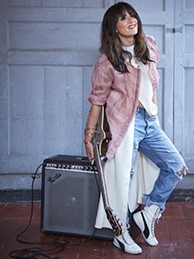 A couple of years ago, Scottish singer-songwriter KT Tunstall announced she would no longer tour and record. Never mind that her debut album, 2004’s Eye to the Telescope, had received a nomination for the Mercury Prize in 2005 or that she’d won the BRIT Award for Best British Live Act and BRIT Award for Best Breakthrough Act in 2006, not to mention the Grammy Award for Best Female Pop Vocal Performance in 2007.

She wanted to pursue writing music for film and if that meant leaving behind a successful career in the pop world, so be it.

She attended the Sundance Composers Lab in Northern California. But in the midst of working there, she started to write the pop songs that would make up last year’s Kin, a collection of generally up-tempo pop tunes that document her move from the UK to Southern California as well as her coming to terms with her status as a pop star.

“I wasn’t sure I wanted to make records,” she says via phone from her Los Angeles home. She performs at 7 p.m. on Thursday at the Music Box. “It was feeling very repetitive. I am in the pop world, but I’m a bit of an anomaly and I’m not a regular pop star. I have also have this foot in a more alternative camp. There’s always a bit of push and pull regarding who’s going to play the song and where I fit. It’s really boring. It’s just a bit draining. I don’t want to have to answer those questions. I just want to make music. The pop world for sure is very competitive. You feel you’re constantly being pitched against one another. I don’t like that. It’s not very helpful to being creative.”

A shimmering song that includes orchestral flourishes and fluttering vocals, “Kin” recalls vintage Kate Bush with its simmering intensity. Tunstall says she knew she wanted to call the album “kin” and had to write a song to match the title.

“I was wondering how to write it,” she says. “I loved flying in the face of the idea of the title track being the catchiest, most accessible song and completely rebelled against that and did something that I think is the most emotional song on the album.”

Many of the songs deal with the theme of self-discovery.

A huge fan of singer-writer Beck, Tunstall says working with Tony Hoffer, who had produced Beck’s Midnight Vultures and Guero and played in Beck’s Odelay band, provided her with a great opportunity to explore new sonic territory.

“He had also done extraordinary work with M83 and this great line of albums with artists like Air,” she says. “He has that mischievous and slightly nerdy analog synth approach to music. He’s very pragmatic and organized and understands how to keep something in the realms of being popular on the radio. I relate to that myself. I like to be experimental to an extent but I want to make sure it’s going to get heard.”

While Tunstall says she’s adapted to living in SoCal, she admits the outcome of the presidential election made her contemplate moving back overseas.

“But it doesn’t seem a whole lot better at home at the moment,” she says. “You can’t just run away. It’s not the right thing to do when you’re fond of a place and its people. I love America. I lived in California for a year when I was 4 because my dad had a sabbatical at UCLA. I’ve really got a deep connection with California. I think at the moment there is a real attack on our freedoms. I don’t agree with it. I’m not going to leave, but they might kick me out if they read my Twitter feed.”