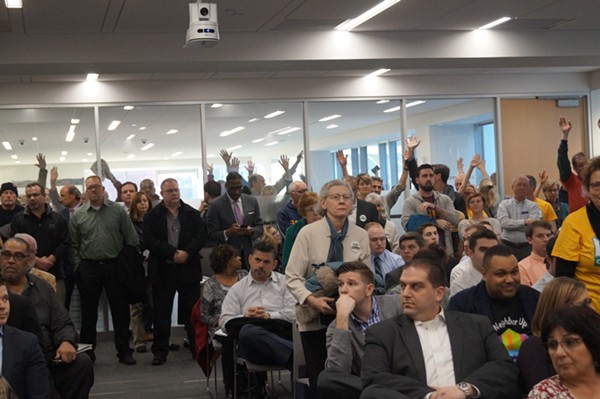 As promised, more than 100 members of Greater Cleveland Congregations packed into the Cuyahoga County Council chambers Tuesday evening to mightily protest the "sweetheart deal" whereby renovations to the Quicken Loans Arena will be funded, in part, by an estimated $160 million in public money.

The deal was orchestrated behind closed doors between city and county leaders and the Cavaliers. Though it creates "no new taxes," it is still an outrageous financial arrangement for a county with a "maxed out credit card," a county that nonetheless already contributes millions of dollars each year to the Cavs, Indians and Browns via a dedicated tax on alcohol and cigarettes.

It's no surprise that locals, dismayed at the brazenness (or else spinelessness) of elected officials and the rapaciousness of Cavs' owner Dan Gilbert, arrived in force.

The room was so crowded — upwards of 100 seated, an eyeballed 60-80 standing around the room's perimeter — that early in the public comment period, the fourth-floor chambers at the County administrative headquarters on E. 9th Street were deemed to be at full capacity. GCC members and others, barred from entrance, chanted "Not All In" at intervals outside the door. Council president Dan Brady remarked more than once that it was the most heavily attended meeting in the council's six-year history.

Donned in Cavs' apparel and NBA Championship head-wear — this to underscore that opposition to corporate subsidies should in no way be conflated with opposition to the team — GCC members reiterated a proposal they made last month. They asked for a dollar-for-dollar match ($160 million) toward a Community Equity Fund that would invest in mental health crisis centers, school programs, workforce development and capital projects in Cleveland's neighborhoods.

Rev. Jawanza Colvin, Pastor at Olivet Institutional Baptist Church and one of GCC's leaders, begged that the same deep wells of creativity and imagination that had so clearly been tapped to excavate $160 million in public moneys for the further enrichment of a multi-billionaire be commensurately tapped for solutions to problems facing the region.

The questions from GCC members were so pointed, the opposition so rational, that the parade of corporate leaders and downtown non-profit lickspittles called upon to preach the gospel of Cleveland's momentum appeared hollow and almost laughably planted by comparison. (As locals witnessed in the "Keep Cleveland Strong" Pro-Sin Tax Campaign, Cleveland's sports owners and business leaders are more than happy to rally the troops, and to shell out big bucks for marketing and public relations.)

Chef Rocco Whalen, Downtown Cleveland Alliance's Joe Marinucci, Businessman Fred DiSanto, and leaders from the local building and construction trades spoke of Cleveland's momentum and of the wisdom — presumed to be axiomatic — in keeping our "foot on the gas pedal." Variations on this metaphor were deployed by almost every supporter of the deal.

But the GCC opposition testified to the strength of that group's strategy and planning. GCC members were the first five speakers at the microphone and each attacked the deal from a slightly different angle.

First, Rabbi Josh Caruso from Anshe Chesed Fairmount Temple invited the members of GCC and from the Cuyahoga County Progressive Caucus to stand up or raise their hands to show the size of their contingent (pictured above). He then asked all employees of Quicken Loans Arena or Quicken Loans to stand. A number of young suits begrudgingly or pridefully stood to be counted. The impression Caruso created — no doubt intentionally — was that that the supporters of the deal were present, at least to some degree, by company mandate.

Caruso asked five probing questions for the council and for the press to consider:

1) Why have County Executive Budish and the Cavs represented the "deal" as an even 50/50 public-private split? Taxpayers are expected to pay in the neighborhood of $160 million on the $282 million project, $38 million more than the Cavs, once borrowing costs are factored in.

2) Why was Cleveland's income tax hike just passed, premised on a lack of resources for basic city services, when the city had access to the "tens of millions of dollars available in the Q deal"? And why was information about the impending Q deal withheld from the public until after the vote on the income tax?

3) Given that the $160 million for the Q deal is over and above the existing sin tax for maintenance of the sports facilities, what's to stop the Indians or the Browns from asking for a similar deal in the next few years? "Doesn't this open the floodgates?" Caruso asked. Where does it stop?

4) How is it possible that Destination Cleveland has $44 million available to contribute? How was it determined that the Q was the best use of these capital funds?

5) What guarantee do the city and county have that the Cavs won't turn around in the next five to 10 years and demand a completely new stadium, especially if Dan Gilbert sells the team? Why aren't the city and county demanding an agreement where if the upgrade is approved, any new stadium in the next 20 years will be 100-percent financed by the Cavs? "What protections do we have on our investments?"

Caruso was followed in impassioned sequence by Donna Weinburger, Rev. Richard Gibson, an activist for non-violence named Gregory Tyrell and Rev. Jawanza Colvin, all of them GCC members. After Rev. Colvin's remarks, members of GCC emerged from the crowd to present County Councilpeople with individual invitations — or Valentine's Day cards? — to a GCC event on March 9 at Elizabeth Baptist Church.

Other local activists objected to the deal on the grounds of equity — shouldn't the county be focused on assets like MetroHealth and the Justice Center, they asked — and the region's host of other problems: the deterioration of infrastructure, crime, joblessness, poverty. The three leaders from the Cuyahoga County Progressive Caucus spoke as well, condemning the deal as yet another example of corporate welfare.

The most impassioned speaker on the pro-deal side was Norman Edwards, former president of the local Black Contractors Association. Before the meeting, Edwards had mounted a solo "ALL IN" counter chant to the "NOT ALL IN"-ers, and rhapsodized about the goodness of Dan Gilbert during his remarks.

"I'd take a bullet for that man," Edwards said. He claimed that Gilbert had stood by a Community Benefits Agreement that mandated 30-percent minority hiring on the project, and he believed that same benchmark would be met in hiring for renovations work. His remarks became testy, though. He turned to the crowd and accused them of not fighting sincerely or properly for diversity and inclusion. After several verbal attacks on the churches, Rev. Colvin stood from his seat and invited Edwards outside for a one-on-one chat, the steady echos from which piped into the chambers for some time thereafter.