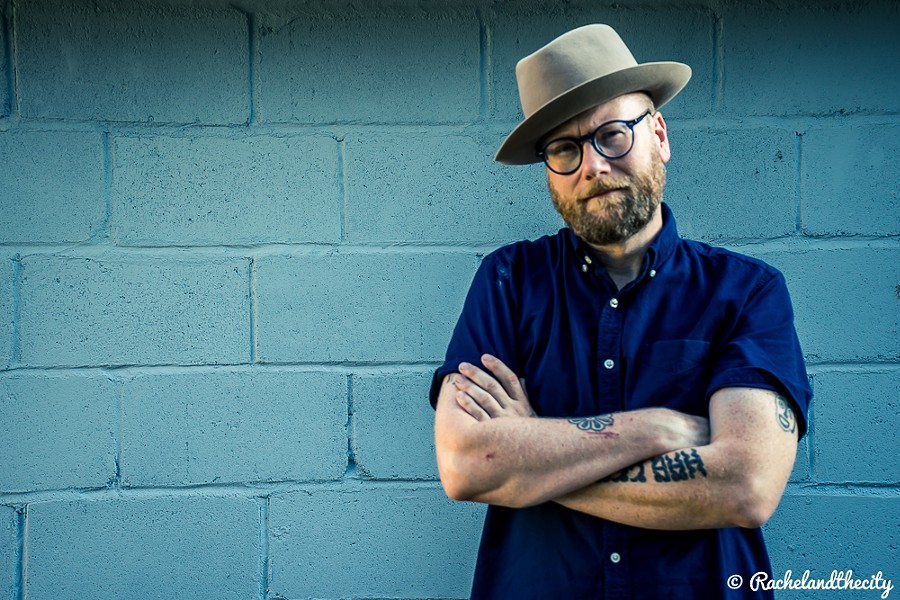 A jazz club doorman turned beat poet-inspired frontman, singer and poet Mike Doughty has carved out a singular niche for himself over the course of a career that now spans two decades.

While he certainly had the most notoriety leading Soul Coughing, the New York-based avant-jazz act that appealed to hipsters and jam-band fans alike, he’s also done fine on his own after going solo in 2000.

On his terrific solo albums, Doughty works his extensive vocabulary into a variety of tongue-twisting tunes. His new album, The Heart Watches While the Brain Burns, again pairs him with multifaceted producer Good Goose. Doughty took the album’s title from a WTF! podcast by comedian Marc Maron, who used the phrase in reference to chewing nicotine gum in the effort to quit smoking.

Speaking via phone from a Minneapolis tour stop, Doughty, who performs on Feb. 23 at the Beachland, tells us a bit about each track on the album. Though they're difficult to reproduce live, he'll play many of the songs at his upcoming concert.

It began with a chord progression, which is this kind of classic minor key chord progression that’s just all over the culture lately — The Weeknd uses it, Gotye uses it, there’s like 35 indie rock bands whose names I don’t remember who use it. It’s basically “Hit The Road Jack” by Ray Charles, slowed down. So I wanted to do something with that. And the other thing is that I just like it when the verses are dark, and the choruses are relatively cheery, at least in content. The lyrics just came out of my notebooks.

“I Can’t Believe I Found You in That Town”

It’s a reference to Huddersfield in the north of England, where I met somebody, and it was kind of happening, but then I basically blew it on Instagram DM’s. I totally did the too many DM’s thing, and it just collapsed like a house of cards. It’s hard to believe that one would find someone in [Huddersfield]. It’s a northern England industrial town, outside of a bigger city — it might be Newcastle? See, I can’t even be bothered to open up Google Maps and tell you for sure.

It’s nothing you won’t usually find on a rock record, other than a little bit more of the arpeggiating cheap Atari synthesizer. But the beat is actually an East African beat from Eritrea. I was over there a couple years ago, and I did some lo-fi field recordings. I just learned the beat, and just wanted to do something with it. You don’t expect the song based on the obscure East African beat to be the one that people like, but people really like that one. Unfortunately, it’s a bit hard to reproduce, so we’ve been sort of touching on it in soundchecks, but nothing so far. It’s based on a real person, but his name isn’t Brian — it’s just one of my numerous crackhead friends.

“There Is a Way Out”

The verses are pretty dark, but the chorus is relatively laden with sunlight. The character in the song says, “Open the door, let me come home, because I’m gonna die.” I don’t know what the story is with that when I’m writing the song. I usually don’t know what I’m singing about when something sort of slips out like that until a couple years of playing it on the road.

“Sad Girl Walking in the Rain”

Originally, I wrote that for my Patreon feed, which is kind of a big deal in my life at the moment. I write and record a new song every week. I was on tour in Britain, and I had to do my weekly song, so I went into this small stairwell, and just recorded it on this little practice guitar I had. I really just banged it out.

That’s kind of a classic example of the process me and Good Goose, the album's producer, use. I basically give him a whole bunch of improvised parts, and he selects little snippets from the improvisations I give him, arranges them, then I do a nonsense lyric vocal to it, he picks out snippets, arranges those, and then I write lyrics to the structure that he’s sanded out of the raw material I’ve given him.

The synthesizer on that is a Roland 303 — the legendary house music instrument. You know, the machine that built acid house. I just wanted to do something that had a 303 line, but that also had a big rock guitar just going “Rowwnn!”

Otherlands is a coffee shop in my neighborhood in Memphis, Tennessee. Again, that was a Patreon feed thing. It was time to write the weekly song, and I realized that what a great title that would be. I gotta give them a copy of the vinyl — I don’t think they’re aware that somebody wrote a song about them.

It’s another Patreon song. It was the first song I wrote in Memphis. It was before I moved there, when I was looking for an apartment. There was a massive citywide shutdown over four inches of snow, which is hilarious. They have to be very specific on the news here about how to drive on ice, which nobody knows how to do in Tennessee. It could be a simple road safety cautionary message.

That’s me and Goose again — that’s one that was banged out from fragments that I gave him, that he sculpted judiciously into a tune.

The synth is a Critter & Guitari pocket piano, which is pretty much every synth that you hear on the album, like those layered arpeggiated synths on Brian. Any synth on there is the Critter & Guitari. It’s a very inexpensive analog synth that it’s really difficult to reproduce things on. There’s been the challenge of arranging the song live of trying to figure out how to get the machine to do the same thing twice. It’s a beautiful instrument, though.