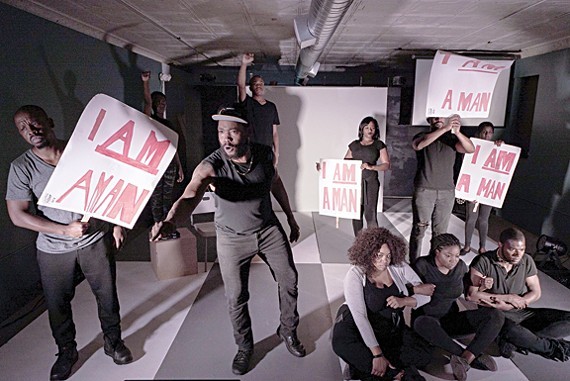 The locally written and produced play about the Tamir Rice shooting, Objectively/Reasonable, played here a few months ago. And now it is getting another life under the auspices of Playwrights Local.

This is a well-deserved “revival,” since it is a powerful and resonant piece of theater. As my review said at the time: “The playwrights—Mike Geither, Tom Hayes, Lisa Langford, Michael Oatman and David Todd—each have notable achievements in theater, and their skills are on full display here. Presented as a series of vignettes, most of them directly addressing the audience, the sad reality of the shooting of this child is brought home with force.”

There were some production wrinkles, in my opinion, which may or may not be addressed in this new production. Those were detailed in this paragraph: “The 90-minute piece feels a bit long and eventually quite repetitive, revisiting the same facts about the shooting multiple times. And the arrangement of the scenes feels a bit off at times, denying the audience a dramatic arc that might lend the proceeding even more devastating power. And one nit: Why the slash mark in the title? Those are the words used to excuse the shooting by police officials and they work devastatingly well as an adverb and noun, with no slash.”

Alas, the slash remains. But the show, as conceived and edited by Todd and directed by Terrence Spivey, deserves another airing. As I concluded in my review, “This is a show that speaks from many broken hearts in our community, and it deserves to be seen by as many people as possible.“ See it. Absorb it. Be changed by it.