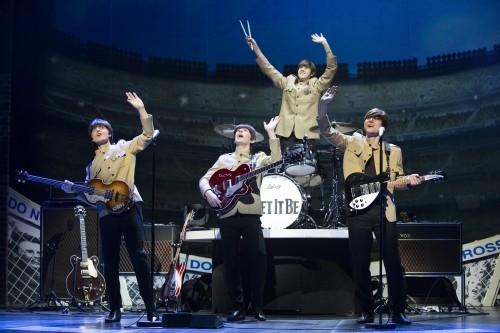 A hit from London's West End and Broadway, Let It Be, a musical based on the career of the Beatles, features a new production that attempts to create the concert the band would have given had it reformed on October 9, 1980, John Lennon's 40th birthday.

Expect to hear classic tunes such as "Hard Day's Night," "Twist and Shout," "Hey Jude" and "I Wanna Hold Your Hand" as well as "Got to Get you Into My Life" and "Lady Madonna," songs not covered in the original show.

In addition, the cast will perform individual works from John Lennon, Paul McCartney, George Harrison and Ringo Starr. Chris McBurney, who portrays Ringo Starr, speaks about the show in this phone interview.

The performance takes place at 8 p.m. on Wednesday at the State Theatre.

Talk about your background. What first inspired you to pursue acting?
In terms of this show, it’s more music-driven. I was always interested in music and theater. I was interested in the Beatles from an early age. My brother got me into The White Album. That set me off on the path to becoming a big Beatle fan. I took up the drums and different instruments and cultivated more of a drummer mentality. Let It Be is a full rock concert and we take the audience on a journey of their music.

Do you specifically mimic Ringo’s style of playing?
All of us try to be as authentic as possible, not just to the music but to the personalities. Each of them have their own distinct characteristics. I try to look like Ringo and play like Ringo and move like Ringo as I try to inhabit his character. We try to recreate the music note for note so we listen to a lot of music. We watched a lot of videos of them at different points in their career. They did change quite a bit from Liverpool to the time they appeared on The Ed Sullivan Show.

The first half of the show documents the band’s rise to fame. What was the key ingredient that made the band into a household name?
It’s tough to say. Some say they were the first boy band in a way. They changed popular music and were such creative influences. It was this confluence of events that came together. I think it could only happen once in a lifetime. The songwriting was second to none. [John] Lennon and [Paul] McCartney and, of course, George Harrison got there later on. I don’t think there won’t ever be another group like them.

The show has some new aspects to it. Talk about what’s new?
We’ve condensed the show we had been doing in the past into the first act. We start with when the Beatles came to the U.S. and debuted in the U.S. in 1964 and we take that to the end of their career when they broke up. In the second half we imagine what might have happened if they hadn’t broken up.

What are the challenges involved in imagining what the band would have sounded like in 1980?
They were a great band as a unit and we try to capture both that and how unique they were on their own too. We play “Band on the Run” and “Imagine” and “My Sweet Lord.” It’s quite similar to picking apart what we did for the first act in that we have to zone in on each individual part. We have a keyboard player who was more prominent in the first act in the Sgt. Pepper era where there are more bells and whistles that the Beatles couldn’t replicate without a fifth member. He comes into play in the second act as well. There are more keyboard and synthesizer type sounds simply because technology had progressed.

Do you have a favorite moment in the show?
It changes from night to night, which is the cool thing about this show. It’s not a stagnant thing. I’m a huge Beatle fan and it’s hard to pick a favorite song or moment. It’s quite cool in the second act when we set up the reunion show, and we come out there like these new, transformed individuals. It’s cool to see the audience react to that.

Why has the Beatles music endured?
It’s one of those things where they influenced so many bands. I really think it’s the songs. It’s an amazing group of individuals, and it’s amazing they came together as one unit that had such love for music and for each other. They were together all the time and by osmosis they became this one unit that changed the world in terms of popular music.

C-Notes Let It Be State Theatre