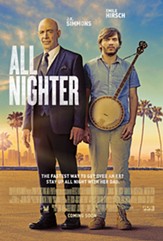 As part of the New York Film Critics Film Series, a regular series of ongoing preview screenings that takes place in about 50 selected major markets, All Nighter, a new comedy/drama starring Emile Hirsch, Analeigh Tipton and J.K. Simmons, will screen on March 20 at the Nightlight in Akron.

The movie centers on the hijinks that take place when when a “globe trotting, workaholic father” (Simmons) discovers his daughter (Tipton) has gone missing. He then forces her banjo-playing ex-boyfriend (Hirsch) to help him find her over the course of one “increasingly crazy” night.

Film critic Shawn Levy will host the screening via a telecast that will feature a conversation with Hirsch, Tipton and Simmons.

Film All Nighter the Nightlight