At the Drive-In Returns to the Agora in June 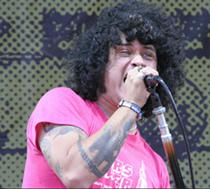 Back in November of 2000, the post-hardcore act At the Drive-In delivered a mesmerizing set at the Agora. At the time, critics touted the group as the “next big thing.”

While the band didn’t entirely become a household name, the group did leave a lasting impression thanks to its visceral live shows.

Now, the band has just announced it’ll release in • ter a • li • a, its first studio album in 17 years. A tour in support of the album, which comes out in May, commences on March 17 in New Orleans.

The band will conclude its North American tour on June 21 at the Agora. Le Butcherettes will open the show.

C-Notes At the Drive-In Agora