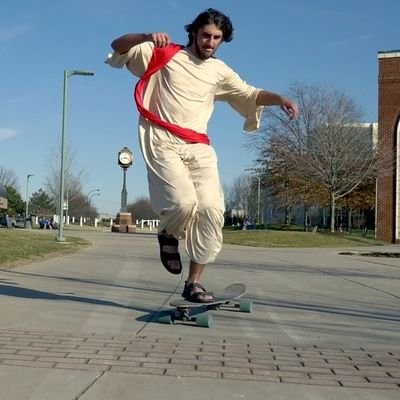 Fellow University of Akron students called him Longboard Jesus long before he ever donned a white robe and sandals.

"I didn't think it was just me, because other people look like Jesus, too, around campus," says Joe Gerin, a 20-year-old University of Akron student who's currently taking off a semester.

But it turned out it was just him. Anytime Gerin would skateboard or longboard across campus, students would narrate his whereabouts on the social media site Yik Yak, commenting on his long, flowing hair and beard.

The campus-wide notoriety led the university to use him in a Halloween-themed video, wearing a $9 JC costume, in fall 2015. Gerin was hooked after the immediate attention. He began to release more skating videos and started multiple social media accounts to help perpetuate his new moniker, Longboard Jesus — or LBJ, same as LeBron James, he points out, a fellow Akron native.

"I wasn't popular in high school, I haven't been popular ever," Gerin says. "But I've been skateboarding since 5th grade, and getting recognized for that is great."

While Gerin says he isn't a religious person, he says that dressing up as the Christian Messiah seems to make people happy. "When I put on the costume for Halloween that first time," Gerin says. "I don't think I've seen so many smiles before in my life, I don't think there's one person that's frowned, and that makes me feel good."

Gerin says that getting used to skating in a robe was a challenge at first because of the inhibited mobility, but it's pushed him to improve his skating skills.

"I'm better now than I ever thought possible," Gerin says.

Below, check out this week's Longboard Jesus video, which has the catchy tagline: He Has Risen Again ... As A Zip. The clip is by TDZ Productions.