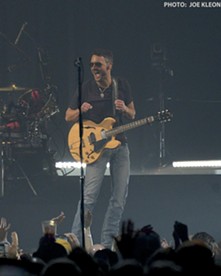 And like those aforementioned rock icons, he tours and records with a killer band that can bring those narratives to life. His Eric Church Band capably alternates between hard rocking anthems and tender ballads, incorporating banjo, organ and mandolin along the way.

Church and Co. were in terrific form last night at the Q as their Holdin’ My Own tour stopped in town.

Playing an epic three-hour set (with a 20-minute intermission) that featured nearly 40 songs, Church had members of the capacity crowd, which he said was the tour’s largest audience so far, on their feet for the entire gig.

Church set the tone for the show by playing Jeff Buckley’s rendition of “Hallelujiah” over the house system before he stepped on the stage for what would be the equivalent of a religious experience. Decked out in blue jeans, cowboy boots and a tight-fitting black shirt, Church wore his signature aviator glasses for the show’s entirety and often looked rather menacing. But he wasn't there to intimidate. Rather, he regularly shared stories with the audience and treated the Q as if it were one of the working class bars where he said he and his band initially performed. At one point, he spoke tenderly about his two children and mentioned that fatherhood had really humbled him.

The concert started fast and furious with “Mistress Named Music,” for which Church brought a high school choir onto the stage to sing with him and the band. He kept things rolling with “That’s Damn Rock 'n’ Roll,” a tune that began with a solitary drum beat before building in tempo, and the gritty “Knives of New Orleans.” He sang the final line of “Knives of New Orleans” with such force, his voice cracked at the very end. “I’m in the mood to kick some ass tonight,” he enthusiatically told the audience.

The mid-tempo “Carolina” benefited from a beefy bass riff, and “How 'Bout You” commenced with an intricate banjo solo. “Cold One” had a Southern rock feel to it, and “Mr. Misunderstood,” the title track from his latest album, began with a simple acoustic guitar riff but built with such intensity to the point that Church pumped his fist enthusiastically at the conclusion. At the end of "Smoke A Little Smoke," which concluded with a few riffs from Black Sabbath's "Sweet Leaf," he asked the audience, "you think you can hang with me?" like he was some kind of half-crazed preacher about to deliver one helluva homily.

The concert's second half came off just as strong. During the "audible" section, Church played a cover of Michael Stanley's "My Town" that showed just how well he connected to the song's blue collar spirit. He said the band had never played the tune live — he only heard the song for the first time earlier in the day and instantly loved it. Other highlights from the concert's second half included "Kill a Word," which began with cooing backing vocals and acoustic guitars before turning into a rousing sing-a-long, and "Creepin,'" a track that found Church strutting the length of the stage with his guitar strapped across his back as he virtually screamed the song's refrain.

Church has set the bar so high, it's hard to imagine how he might top himself the next time he tours. One thing's for sure — the guy enjoys playing live so much, you can bet he'll perform with the same kind of gusto whether he's playing to a crowd of 20 or 20,000.