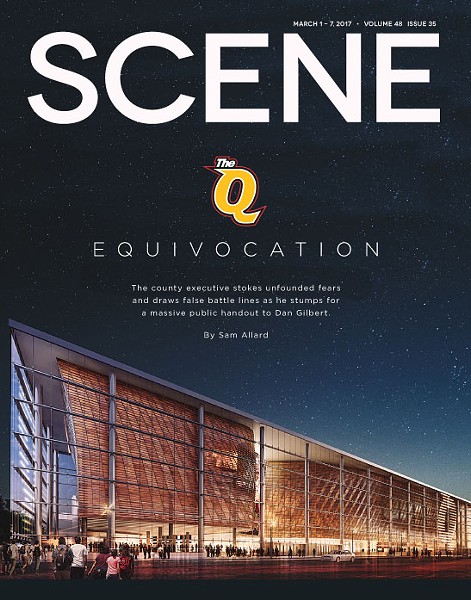 “I guess our hands are tied,” said County Councilwoman Nan Baker, at the tail end of a three-hour county council meeting Tuesday afternoon that probed, on a microbial level, the financial arrangements of the proposed Quicken Loans Arena renovation deal.

“I'm disappointed, in a way, that we couldn't have negotiated a true public-private partnership. The county is allowing a for-profit entity to take advantage of these bonds," Baker continued, referencing the fact that the county, who will issue the bonds, will also be responsible for the roughly $40 million in interest payments. "We are using county bonds for a very strong, very capable sports team that would probably be able to finance this themselves, especially given that this is a tenant upgrade. We are not another big business. We are a county government.”

Baker’s comments echoed some of her council colleagues: in her dismay, in her disappointment, and, ultimately, in her resignation. While council spent three hours translating a barely scrutable, financial-lingo-heavy presentation by the county’s financial adviser Tim Offtermatt — a man who, until very recently, was the board chairman of the Gateway Economic Development Corporation, aka the Cavs’ landlord, in which capacity he played an integral role in orchestrating the deal for the private side of the “public-private partnership” — Baker and the rest of council seemed to sag and shrug by meeting’s end.

“I’m speaking in terms that are unrealistic,” Baker said, after professing her disappointment.

They were and are unrealistic because the Cavs and the region’s elected leaders — to say nothing of Cleveland.com — have so thoroughly and effectively conveyed the threat of the franchise’s departure if the county does not submit to the deal that to object on even minor or technical grounds is considered politically toxic.

Which is, of course, an inversion of the democratic process. [As a reminder: The people that make up a voting public are supposed to determine what’s important to them, and then elected leaders are supposed to work to enact the priorities of their constituents. Elected officials’ job security is supposed to be linked to their success in doing so, or at least to the sincerity of their efforts. But in the current model, a private, corporate entity (composed of negotiators who by and large reside outside of both Cleveland and Cuyahoga County) makes demands, and elected leaders bend over backwards to meet those demands in the face of public outcry. It's an ugly distortion of democracy and a real disgrace to the region.]

Far from making demands of its own, or rejecting the proposal outright, the best county council could do was find problems with the Cavs’ deal and then request documentation and be sort of glum about it all.

“I’d like to go on record that I do not believe the general fund impact is immaterial,” said Councilman Dale Miller, for example, after one of Offtermatt’s rambling answers that included the following words: “contingent rent” “sports facility reserve B,” “residual revenues,” “Silo two,” and the adjective “goodly.”

It was here revealed that the Cavs’ commitment to pay all cost overruns and shortfalls on the project was another bogus claim, or at least a specious, incomplete one.

It turns out that during negotiations, the Cavs insisted that the county create a special reserve that would be used exclusively to fund debt service on the project bonds. [My meeting notes are unclear as to whether this was termed County Reserve A or B], and that the cost overruns would in fact be paid from this reserve. The Cavs would only cover cost overruns in the event that this reserve had been totally exhausted, and even then, this would be in the form of “contingent rent.” As such, the Cavs would be reimbursed for the payments just as soon as the reserve was replenished. “But for the presence of the reserves,” said Offtermatt, “the Cavs wouldn’t support the arrangement.” (Correction: The above arrangement refers to tax shortfalls. It's as of yet unclear what would happen in the event of construction cost overruns.)

Despite this revelation — a surprise to just about everyone in the room — Offtermatt and Len Komoroski continued to praise the Cavs’ generosity and the deal’s public-friendliness; how, among other things, the team has committed to pay for all cost overruns and shortfalls on the project. (This literally happened). Councilman Jack Schron could do little but roll his eyes.

“The reality is, we’re going to be covering those,” Schron said.

This is a striking departure from Cleveland.com's characterization of the negotiations, which they wrote about in their editorial supporting the "tightly crafted" deal like this:

"County Executive Armond Budish also drove a hard bargain that includes some critical failsafes that will allow the county to issue the bonds with monetary protection from the Cavs if ticket tax revenues fall short."

But such was the tenor of the meeting. Councilpeople brought up very real concerns and worthy points of debate: Much like Schron, who last week wondered whether or not the new Q might undercut the business of the taxpayer-financed Convention Center and Global Center for Health Innovation, Councilwoman Sunny Simon wondered whether the enhancement of restaurants inside the Q might detract from the business of restaurants downtown (especially given that much of the Cavs’ argument has centered on the facility’s role as trickle-down economic driver).

“I don’t want to cannibalize these small businesses,” Simon said.

She also asked whether or not there was a design currently in place. (It’s about 75 percent complete, according to Komoroski) which begs another question: How on earth can the Cavs possibly know the project's final budget? And how has it remained unchanged from initial estimates?

The $140 million figure was originally projected more than two years ago, when the Cavs first publicly proposed their 50/50 split. Has nothing at all been clarified to nail down that number more precisely?

Councilman Dale Miller asked about the merits of the designated county reserves, especially in light of what were described as serious gaps in the Sin Tax.

“I'm worried about putting aside funding for reserves if we can't afford to pay for basic maintenance,” he said.

Councilman Pernel Jones asked repeatedly about the Community Benefits Agreements in place and seemed to enthusiastically support the project, so long as the public was made aware of the jobs and apprenticeships that have been made available to black labor groups.

Councilwoman Nan Baker took a moment to correct the idea that the Cavs should be seen as generous for paying their own operating costs. This has been frequently cited as a measure of Dan Gilbert’s magnanimity.

“Why would we ever pay for operating costs?” She asked. “That’s disingenuous. You’re a private operation. Why would we pay for improvements that would enhance what you want to do?” (A question, of course, with much broader implication and valence, given the deal at hand).

Schron continued to sniff out the abundant conflicts of interest that ought to call into question the legitimacy of the negotiations. He held up a printout that showed Offtermatt as the current Chairman of the Board at Gateway, though Offtermatt said he’d resigned in August when he was hired as the county's paid financial adviser, and that his term concluded officially on Dec. 31. As far as he knew, he said, Gateway had yet to select a new chair.

(Gateway, also, per Roldo Bartimole, canceled its February board meeting, where the public might have objected to the latest money grab.)

To muck things up further, Len Komoroski serves on the Board of Destination Cleveland, whose budget has been eviscerated for the Q renovation project. None of these appointments — not even Fred Nance's who, as a managing partner at Squire Patton Boggs, represents both the county and the Browns and is one of the primary stokers of Modell-related fears — were said to be conflicts of interest.

Schron noted, as he did last week, that it seems ludicrous to rush to authorize this project when we won’t know the effects of the state of Ohio’s budget until June. To that concern, Komoroski articulated the need for haste if Cleveland is to secure the all-important All-Star game in 2020.

Nan Baker’s comments, though, summed everything up. Despite the fair and natural objections to the deal, and the pointed questions about the backroom negotiating, county council could do little but sigh and say, “such is the cost of doing business.”

“I really appreciate your comments,” Offtermatt deigned to respond to Baker, while Cavs’ President Len Komoroski stood by his side, eyes as unctuous as talc. “We talked about [more favorable scenarios] at length. It was determined that because of the impact of the arena and previous experiences with professional sports teams in Cleveland [ART MODELL!!! THE BROWNS!!!!!], that it was prudent to move forward the best way we could to get to a 50/50 arrangement. Through the rigors of negotiating, via the executive's leadership, this is our end product.”

The quote unquote “rigors of negotiating” has yielded for the county a seven-year lease extension by the Cavs, and that’s it. That’s all we get. But that, at least for County Executive Armond Budish, is “the key.” He screeched through remarks last week destitute of integrity, decency, or common sense that through the intercession of Dan Gilbert and this deal, we’d get to “lock our championship Cavaliers into Cleveland for an additional seven years from 2027 to 2034.”

This is, of course, the only argument. Every talking point about the life-span of NBA arenas, the Q as an economic driver, the vibrancy of downtown, the dubious claims about unprecedented public-friendliness etc. must be seen as nothing but distractions. After all, the Q’s 2300 employees won’t lose their jobs if there’s no new glass facade, or if Dan Gilbert decides to shoulder the financing on his own. They’d lose their jobs if the Cavs left town.

But the prospect of Dan Gilbert plucking the Cavaliers franchise from LeBron’s backyard, immediately after LeBron brought a championship to a rabid local fan base in a city where Gilbert owns a casino monopoly and has headquartered his mortgage lending empire is patently absurd.

“Everybody with a brain, everybody in this room knows that the Cavaliers owner doesn’t need these subsidies,” said local attorney Peter Pattakos in public comment, when the majority of the attendees at the afternoon meeting had departed. Pattakos wrote a column for Scene Tuesday to the same effect. “Because [the threat of the franchise departure] is the only real justification for these subsidies, we should analyze it on its merits and make conscious decisions about how best to deal with a so-called community partner who would play on Modell-era fears to hold the community hostage in such a way…. To think that Gilbert would turn himself into Art Modell, but worse, by taking such an action, who in Ohio would ever take out a Quicken Loan again?”