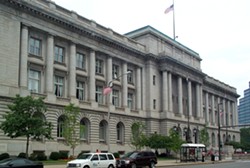 Thanks to at least a year of planning and work, documents and city news and phone communications will be available across a spectrum of languages, including Spanish, which is spoken by 7.4 percent of the population (approximately 28,000 residents).

The "Language Access Plan" began in earnest last spring, following a series of misfires with Cleveland's English-only communications. For instance, about two years ago, a Spanish-speaking couple in Ohio City had received a postcard about how the city's trash and recycling pick-up was changing. If you put your trash and recycling out on the wrong day, you're assessed a fine. The couple was assessed a fine, and they weren't sure why.

The Legal Aid Society stepped in, and found that the city had made no attempt to communicate the news in any language other than English.

"That caused us to look into what's going on at the city in terms of language access," says Melanie Shakarian, director of development and communications at the Legal Aid Society of Cleveland. "At the time there wasn't too much." Legal Aid got the ball rolling.

She and her organization began reaching out to Jackson and Council President Kevin Kelley. Legal Aid outlined the impact on the non-English-speaking population, which is not insubstantial. Jackson and the city dug in, and began surveying each department at City Hall to determine the spectrum of language needs at play. ("The city was really wonderful for us to work with," Shakarian tells Scene.)

Cleveland, of course, is a city with a long track record of welcoming immigrants. This new plan gets City Hall in line with that history.

As the Language Access Plan states: "Title VI of the Civil Rights Act of 1964 is a federal law requiring meaningful access to services for those with limited English proficiency." In the event that a Spanish-speaking Cleveland resident needs to, say, pick up a copy of a birth certificate at City Hall, the city must make communication and access to materials available in that language. It's a civil right, and a public entity that does not comply would be violating federal law. (See the Cleveland Metropolitan School District resolution agreement signed in 2011.)

Central to the plan was the city identifying 74 "vital" documents (like birth certificates) to be translated into other languages, along with other areas of need (like phone interpretation services). By last fall, the phone and web and written services were quietly updated, brought into compliance with Title VI. This week, the city announced its completion of the plan. Outreach and advertisements are occurring now. A city spokesperson noted that the plan "will continue to evolve."

At a press conference this week, Jackson said, "What we wanted to let them know is that this is Cleveland. Our personality, our culture, our character is not in line with the hate." On the subject of naming Cleveland a "sanctuary city," Jackson demurred. ("We just do what we do," he said.)

Police Chief Calvin Williams on the other hand, underscored that the local police department doesn't inquire about immigration status during traffic stops or arrests, which is one of the tenets of sanctuary city status.

Read the first edition of the Language Access Plan here:

City of Cleveland Language Access Plan by sandyatscene on Scribd