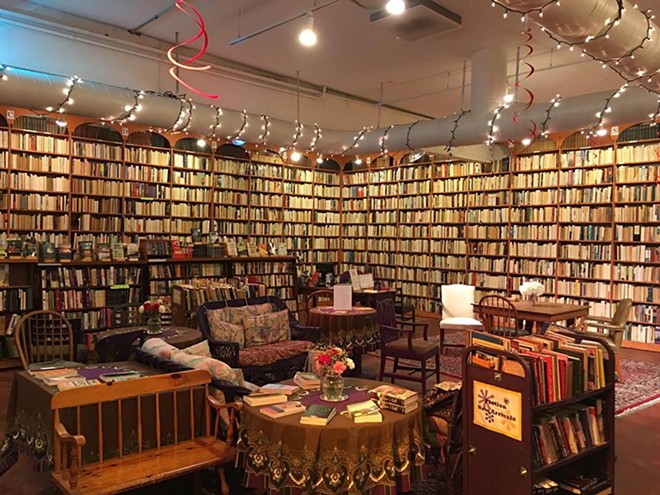 Wednesday night, Harriett Logan and her crew at Loganberry Books purposefully shelved all of the works written by men backwards. That's right, in honor of Women's History Month, the Shaker Heights secondhand bookstore switched around 10,000 books of general fiction and poetry penned by male authors so that their spines faced inward. The process took two hours.

"I was looking for an event and activity to commemorate Women's History Month, but I grow weary of doing the same thing over and over again," says Logan, who's owned the bookstore for more than 20 years. "Just reading from great pieces of literature didn't seem participatory enough, and this activity doesn't require anything."

Logan says that the spines to the wall method isn't her invention, but she's never heard of anyone putting this sort of feminist/political awareness spin on it.

"My staff is entirely female here, but we have a lot of books written by women and about women, and we go out of our way to get them," Logan says.

Already she says that customers have been confused by the new sorting system.

"Truly, this is a metaphor of silencing the male voice," Logan says. "At least for this month."

And when it comes to celebrating Women's History Month, Logan says that awareness always comes first, and action seems to follow. One way to do that is to read voices by women and patronize women's business, she says.