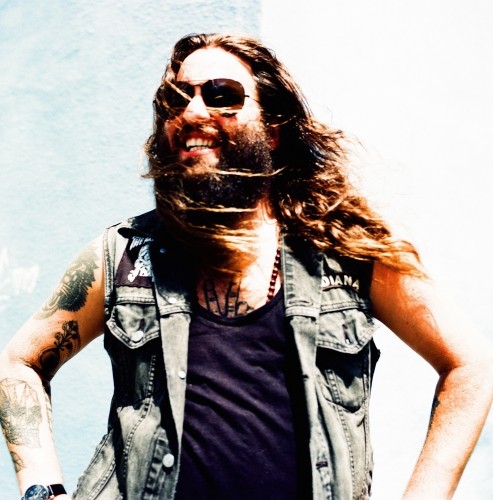 In 2014, Strand of Oaks released HEAL, a critically acclaimed breakthrough album which brought the band a wider audience.

Timothy Showalter, the band’s leading writer and musician, used to write more folk-oriented songs, but on HEAL, he changed the band into a more rock-driven unit.

The album uses Showalter’s life as a backdrop to supply much of the album’s emotional catharsis.

Over the past few years, his band Strand of Oaks went from playing small bars and house shows in Showalter’s hometown to huge outdoor shows, including American festival Bonnaroo. The group performs at 8:30 p.m. on Friday, March 17, at the Beachland Tavern at a concert that doubles as a Planned Parenthood fundraiser.

“[Bonnaroo] was my first and only ever crowd surf moment,” he recounts via phone from his home in Philadelphia. “If I had to retire after that Bonnaroo show, I would be totally fine with that. I climbed the mountain; I got to crowd surf. I was worried I exceeded the weight limit, though — I think I heard a lot of groans in the crowd.”

Even though the album was a breakthrough for the band, Showalter doesn’t want to continue to rehash the same aesthetic from record to record. The band is now fresh off the release of its new album Hard Love, which maintains the anthemic guitar rock of HEAL but doesn’t rely quite as much on Showalter’s personal narratives to supply the lyrical content.

“It was just this general change from HEAL, because that record was written in such an isolated place — me not interacting with the world…I wrote a song [on HEAL] called ‘Shut-In’ for Christ’s sake. It was very hermit-like,” he says.

Part of not wanting to go back to HEAL’s songwriting style is due to Showalter’s exhaustion with being ‘in character’ all the time while he’s playing shows. “I think the one feeling that I get from Hard Love that I get really excited about is that I can step away a little bit and add more space and add more of a musicianship instead of a personality,” he says. “Before, I felt like I always had to be singing, always have to be telling you about something. On Hard Love, I think just being around people, having a good time, and living on the edge really brought out a more extroverted music style.”

That extroverted music style is reflected on new tracks like single “Radio Kids,” which features a big, sweeping guitar riff, or title track “Hard Love,” which starts off like an electronic dream. Though guitar and vocals largely drive the record, it possesses a broader songwriting experimentation that wasn’t present on HEAL. Showalter explains that many of the bands that he got to see up close while he was on tour influenced his sense of experimentation.

“When I got home, the experiences from tour were living in my head so strongly. I saw [’80s electronic group] Underworld play in Primavera, and that beat just stuck in my head. I walked around to 120 BPM for like a month after that,” he jokes. “It was so natural when I got home that all my music decisions changed. And they always do when I see bands — I always let so many influences in. I saw all these psych bands and rave bands, and when I came home, I was like, there’s a whole other beat and logic that’s in my brain right now.”

One of the other influences on Hard Love is the drug use, but not in a way that feels overbearing or preachy. According to Showalter, drugs were a part of the touring cycle, and listeners can hear those experiences play through on the record, as each song aims to recreate a specific feeling or moment. Showalter explains that the album doesn’t solely revolve around drug use, though.

“It’s more of the feel that drugs bring you,” he says. “It’s not really that drugs play in the subject matter of the record. I’m very of the mindset that you can do what you want as long as you don’t hurt anybody or yourself. I don’t necessarily want to promote [drugs] or not promote them. On a song like ‘On the Hill,’ it’s just the feeling you get. You do escape, but you have this hyper-sense and connect to the world a little more, but then you get into ‘Cry,’ and it’s like what happens after that feeling’s gone. If you choose to take that ride, there are very high highs and very low lows that come as a result.”

On the album, Showalter tries to make those experiences as real as possible. He explains that for “On the Hill,” he had to play the bass line in the studio — not necessarily because he was the best player, but because he “knew that feeling, and knew that better than anyone in the studio.”

He also wants the record to give listeners the sense that they’re standing right next to the band.

“I wanted some of these songs to feel like someone just had a recorder up in a field while we were playing live, and that’s what it sounded like,” he explains. “I wanted the record to already feel like a live experience.”

Some listeners might call Hard Love a psych-rock album because of the album’s themes and focus (one of the songs is titled “Taking Acid and Talking to My Brother”), but Showalter is a bit worried about calling Hard Love ‘psych’ for fear of being mislabeled.

“I purposely tried to stay away from the word ‘psychedelic’, cause now I hear someone say, ‘Oh, my band is really psych,’ and I’m like…really? Because it sounds like Maroon 5,” he says, laughing. “It’s like the word ‘indie music’ or whatever that means — it’s become this catchall phrase. Psychedelic to me though is kind of what’s beyond what you can see or what you can sense, and then there’s one more thing that lives beyond that.”

The album’s dedication to being open to new experiences and living in the present has been a part of Showalter ’s life for a long time. When asked about the song variation on Hard Love, Showalter explains that having open and diverse musical tastes is very important to him.

“I think it’s just always been there — if we were to hang out, and you were to take a long van ride with me, what I choose to DJ in the ride would be so diverse. The music that I like to listen to and that moves me just kind of naturally just goes into the songs I write. For me, everyday, it becomes more eclectic.”

At times, though, he even admits that it might be a detriment to his success with a bigger audience. “A lot of times it’s all mixed together, so there will be a song that at the same time feels like a metal song but it also feels like a folk song. I probably would be a little more successful if I learned how to have one particular ‘sound’, but I don’t give a shit — I can’t do anything else at this point!”

As he continues to tour and to make music, Showalter wants to try to continue evolving and trying new things. Recently, he’s been asking fans to give him ideas for Phish songs to cover, and he’s been thinking about moving into prog rock or jam band territory. Ultimately, Showalter wants to explore the rock genre as his music evolves.

“I just view the rock genre as limitless, and not necessarily a style, and that’s what I always try to shoot for, especially with Hard Love,” Showalter explains. “This album felt more like I was getting closer to pulling off what I wanted to do a little better.”