Panic! at the Disco Thrills Capacity Crowd at Wolstein Center 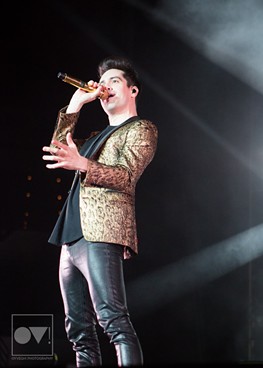 We’ll always remember the time Panic! At the Disco played at House of Blues in 2014, and sick-and-ailing singer Brendon Urie soldiered his way through a high-energy 90-minute set with all the determination of a pro athlete. The guy even did a back flip during the show’s final minutes.

While last night’s show before a capacity crowd at the Wolstein Center didn’t possess the same kind of drama, it did show how Urie has evolved into a bona fide showman. You can see a slideshow of photos from the concert here.

Dressed in skin-tight pants and a gold lamé jacket, he regularly snapped his fingers and busted out Sinatra-like twirls. (The Sinatra connection came to the fore during his rendition of the retro-leaning title track from the band’s latest album, Death of a Bachelor, that the group delivered with a live horn section).

While Urie essentially spoke his way through "Death of a Bachelor," he showed off his vocal prowess on tracks such as “Miss Jackson” and a cover of Queen’s “Bohemian Rhapsody” that’s become a staple in the band’s set. The guy effortlessly slipped into falsetto throughout the show, and his voice sounded just as strong by the end of the 90-minute set.

Through it all, the band offered a thrilling stage show that alternated between flickering strobes and bursts of pyro. Mid-show, Urie performed solo on a piano in the middle of the arena’s floor while silver glitter sprayed down on him and the crowd from the ceiling. He then made his way through the audience back to the stage, slapping high fives and hugging fans along the way. He clearly enjoyed mixing it up with members of the audience and remarked that “Cleveland gives good hugs.”

While a Urie drum solo on a medley of current pop hits such as the Bruno Mars track “24k Magic” didn’t add anything to the performance, the group got back on track by set’s end for rousing renditions of “I Write Sins Not Tragedies” and “Victorious.”

Openers MisterWives added their own positive vibes to the show. Decked out in bright pink hightops and short shorts, singer Mandy Lee brought plenty of energy to the stage, but her vocals often sounded shrill thanks to a poor sound mix that blurred the intricacies of the songs and made it seem like members of the indie pop band couldn’t play in sync with one another.