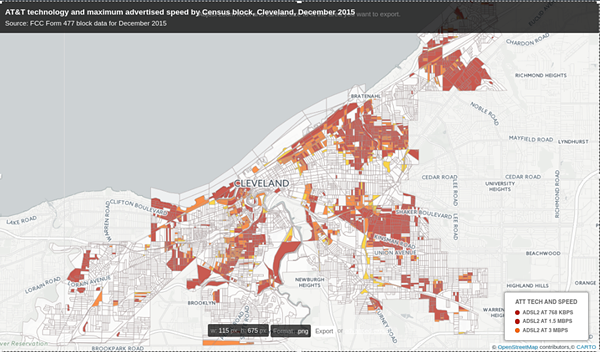 With the long history of Ohio's "cable competition" legislation as its backbone, the National Digital Inclusion Alliance today released a report that shows how AT&T willfully expanded its Internet services in Cleveland and left the city's poorest neighborhoods to languish with sluggish technologies. The organization uses the term "digital redlining," and a series of maps reinforces the point.

Using records and data provided to the FCC, the NDIA designed several maps that show where AT&T's highest and lowest Internet speeds are offered. As AT&T developed its technology and rolled out improved services, neighborhoods like Hough, Glenville, Central and Fairfax — where the poverty rate runs higher than elsewhere in the city — were excluded. When, last year, the company offered a $5/month deal to its low-income customers, the NDIA found out that, actually, many of AT&T's customers in Cleveland don't even have fast enough Internet access to qualify.

Here's a brief history: 10 years ago, state lawmakers eliminated the municipal franchising of cable television providers. The theory is that this would foster greater competition, and that the market would work in customers' favor. AT&T promised advanced services — the thing that would eventually come to be known as U-Verse.

Between 2008 and 2013, according to NDIA, AT&T outfitted Cleveland with optical fiber extensions and VRAD cabinets. The problem is that not all of Cleveland or Cuyahoga County is served equally by this infrastructure (despite a state provision that prohibits cable companies from excluding customers based on income or race). Homes with access to Internet download speeds of 18 mbps or more are found in the outlying areas of the county (see below), and most of Cleveland is left with significantly slower access. This discrepancy hampers any number of quality-of-life issues relating to employment opportunities, homework, job training and state bureaucratic activities. The "digital divide" is a real thing. 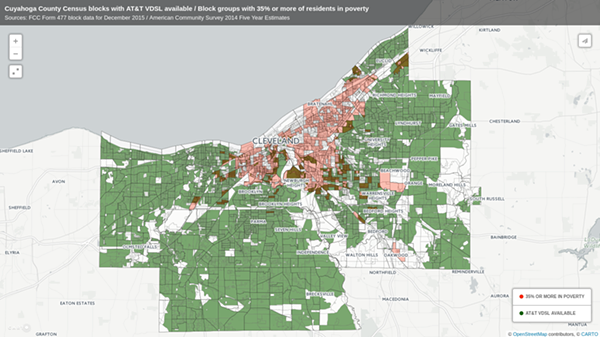 AT&T has moved on to different types of Internet access technology, and by all accounts is no longer deploying that sort of U-Verse "Fiber To The Node" infrastructure, meaning that there are no improvements in sight for Cleveland's poorest neighborhoods. The areas that were not built out with fiber infrastructure will be unable to join a future theoretical 5G data system.

"The national context of this is that AT&T basically gave up on this deployment and changed its business model," Bill Callahan, research and policy coordinator at NDIA, tells Scene. "There's nothing random about this. The decision to [build out fiber infrastructure] in some wire centers and not others is a deliberate planning decision. This has nothing to do with customer demand; they had no idea what the customer demand was going to be when they did this. It's a decision built on the characteristics of the neighborhoods. In general, I would say that means poverty."

(Update) A spokesperson from AT&T responded to Scene: "Access to the internet is essential, which is why we've continuously invested in expanding service and enhancing speeds. The report does not accurately reflect the investment we've made in bringing faster internet to urban and rural areas across the U.S. While we are investing in broadband, we’re also investing in technologies that will mitigate some of the infrastructure limitations"