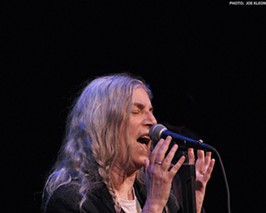 In 2015, singer and poet Patti Smith began playing her debut album Horses in its entirety to mark the disc’s fortieth anniversary. For a variety of reasons, the tour never landed in Cleveland, one of the first cities outside of Smith's New York home base to embrace the singer.

Last night at the State Theatre, the Horses anniversary tour finally came to town. Smith didn’t disappoint, delivering a passionate performance that displayed the kind of raw intensity for which she’s known and showing the extent to which she remains a singular performer in the rock world. You can see a slideshow of photos from the concert here.

The two-hour performance commenced with Smith’s approximation of the Them tune “Gloria.” Backed by original band members, guitarist Lenny Kaye and drummer Jay Dee Daugherty, Smith and Her Band worked into a lather for
the song and then took things down a notch for the reggae-inspired “Redondo Beach.” Kaye laid down a tasteful blues guitar riff that complimented the tender piano harmony in “Birdland,” a tune that featured a mix of speaking and singing, and the band played up the punk side of the rollicking “Free Money.”

Smith then told the audience that side A of Horses had come to a conclusion, and while holding a vinyl copy of the album, said it was time to turn the record over and “press the needle into the groove” to play side B. The poetic gesture spoke volumes about how our listening habits have changed.

She introduced “Break It Up” by talking about the dream that inspired the song, a lament for the late Jim Morrison. She also preceded the song by telling the audience that had spent the day at the Cleveland Museum of Art. “That alone makes it worth coming to Cleveland,” she said, still reeling from having seen Albert Pinkham Ryder's The Racetrack (Death on a Pale Horse).

She started “Land,” the album’s centerpiece, with a spoken intro and then flipped into character, closing her eyes as she wailed about how the song’s protagonist “started crashing his head against the locker.” For the roll call of lost "cultural voices" at the end of “Elegie,” a song she wrote in the wake of Jimi Hendrix’s death, she namechecked members of the Ramones, David Bowie, Joe Strummer and Lou Reed as well as members of the Patti Smith Group who are no longer with us. We thought we heard one fan yell out "Human Rights" as well.

After playing Horses in its entirety, Smith and her Band delved into a selection of other tunes with a political bent to them. Smith dedicated “Ghost Dance,” which began with the chant “we shall live again,” to “everyone who held their ground at Standing Rock,” and explained that she wrote her lines of “Because the Night” about her late husband, Fred “Sonic” Smith. At the end of “People Have the Power,” she yelled, “Don’t forget it. Use your voice.”

For the set’s final song, a cover of the Who’s “My Generation,” she strapped on a guitar and immediately began eliciting feedback from it as she hunched over her amplifier. She’d eventually rip the strings off the thing as she yelled “love conquers all” and disowned Donald J. Trump even though she admitted he was the same age as her and Kaye and part of the same generation that set out to "change the fucking world."

The recent presidential election might have dealt the activists and optimists of the world a serious blow, but Smith’s powerful performance and its message of hope stands as an inspiring moment in what has been a bleak year.