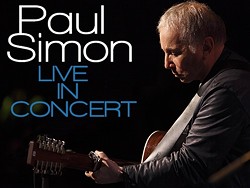 With fellow singer-songwriter Art Gufunkel, Paul Simon had some of the ‘60s biggest folk-rock hits with tunes such as "The Sound of Silence," "Mrs. Robinson," "Bridge Over Troubled Water" and "Cecilia.” And that's not to mention a slew of other terrific songs the duo churned out.

After he and Garfunkel parted ways, Simon continued to see commercial success with his solo efforts. Last year, he released his 13th solo effort, Stranger to Stranger.

The subject of a recent Rock Hall exhibit, Simon will perform at Jacobs Pavilion at Nautica on June 13.