The Monkees' Micky Dolenz and Peter Tork Talk Beatles, the 60s and More Ahead of Wizard World

The term “selfie” didn’t exist in 1966, but the Beatles were closing the curtain on their career of concerts and decided to bring cameras on stage to document their final live performance (not counting the unannounced rooftop performance at Apple Headquarters in 1969). Holding cameras at arm’s length, they snapped historic photos of themselves and their devoted fans at Candlestick Park in San Francisco. Thoroughly exhausted from years of struggling to scream lyrics louder than their hungry fans, the Beatles packed up their touring years just as the Monkees hit the road in hopes for a sliver of that mania.

Members of the Monkees will be in Cleveland at this weekend's Wizard World to expound on their journey.

Often referred to as the “Pre-Fab Four” Monkee Peter Tork, one of the four beloved band members explains the reason behind the name: “There was this notion that the Monkees were trying to cash in on the Beatles and in fact, there’s a truth to that. The TV show was built on the premises of ‘A Hard Day’s Night.’ The Monkees as a business entity, not just the group but the TV show, was designed to service the market that the Beatles couldn’t service.” That market being television.

The plot of the quirky American television series, The Monkees was, as fellow Monkee, Micky Dolenz describes it, “about this band that was trying to be the Beatles. Trying to be famous. But on the television show, we never were [famous]. It was the struggle for success that was part of the theme of the show and I think that endeared it to a lot of kids — kids who were in their garages and basements trying to be famous.”

In real life of course, they became very famous, with phenomenal success not just as a television series but as a band with hits like “I’m a Believer,” “The Monkees” and “Daydream Believer.” A generally overlooked, yet staggering triumph took place for the band in 1967, when the Monkees outsold the Beatles and the Rolling Stones combined. Tork humbly points to the fact that the Beatles and Stones albums that year had run their course by the time Headquarters hit the charts. Even so, it remains a remarkable feat for a band that was manufactured for TV just one year prior. “Hey,” Tork says, “it’s still a hell of a thing.” 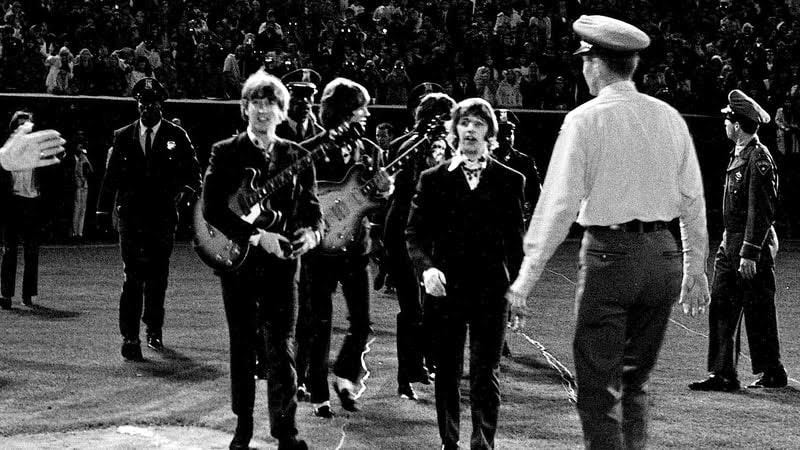 Everyone was bananas for the Monkees at this point, including the Beatles. John Lennon was particularly a fan of the show and was quick to praise it.

Their fate seemed inevitable even early on. At the rise of the Beatles’ success in America, Davy Jones — who would soon go on to be the Monkees' British frontman — brushed elbows with the Beatles when they both appeared on the Ed Sullivan show on the same historic night in 1964. Although Jones had no idea who the Beatles were at the time, he would soon find out. He confessed in the 2011 documentary Beatles Stories that after he walked out of the theater filled with girls screaming for the Fab Four, he thought to himself, “I want a piece of this.”

The Monkees would continue to mingle with the Beatles quite a few times over the years, even during the Sgt. Pepper sessions. The one Dolenz remembers best was, “a tracking session for ‘Good Morning Good Morning.’ And another one was ‘A Day In the Life.’ The big famous piano chord. They threw a massive party and had all these pianos and musicians in the recording studio. I did spend time with all four of them at some point.”

Both Monkees seem to agree on their favorite Beatle: “I would say by far the person I spent the most time with probably would have been Ringo,” Dolenz shares. “He moved out to L.A. and spent a lot of time there in the 70’s and we had a lot of mutual friends like Harry Nilsson, the singer/songwriter. I also spent time with John and Paul.” Tork is quick to share on his affection for good old Ringo: “He is my favorite Beatle. It truly was Ringo that I found to be the most open and human.”

The guys are still chummy with the Liverpool lads. Dolenz says, “I just saw Paul like a year or so ago in a rehearsal and we chatted about the old days." Tork manages to keep up with his favorite, “He does his 'Ringo All-Star' show every so often and whenever it’s in the neighborhood I catch it and go backstage and say hi. We have a number of interests in common and we catch up. He’s a sweetie. He’s just a total sweetheart.”

Fifty-plus years after the Monkee madness began, the band has the credentials for a spot in the Rock and Roll Hall of Fame. But the notion doesn’t seem to keep them up at night.

“You know, I don’t pay much attention to that stuff myself,” Dolenz reports. “I don’t chase awards and I don’t chase banners and stuff, you know. I remember when we won two Emmys for the show back in the 60’s I was extremely proud of that because I was a child of television myself. But the thing about the Rock and Roll Hall of Fame is, I’m very flattered that fans have started petitions [for the Monkees induction], but there have been a lot of great bands that have not been inducted, as you know, I’m sure. And with a lot of them [great bands] you gotta wonder why.

"It’s not a democratic, sort of public forum. It’s not like the National Football League Hall of Fame or something. The Rock and Roll Hall of Fame is a private club. It’s like a private country club. These three guys in the business started this private club called the Rock and Roll Hall of Fame and they let who they want into their club. It’s as simple as that.” Tork isn’t quite as spirited over the deliberation but says, “I don’t know whether we do belong or not. If you gave me a vote, I would vote yes.”

Do the guys still Monkee around together? Tork lets us in on a secret, “Well, I’ve never been really close with Michael [Nesmith] for some reason. You know, I have a lot of respect for him and admiration. But somehow we’ve never integrated. We’ve never been warm with each other. We worked together and did pretty well at it really. But Micky on the other hand, I enjoy hugely. We have some very good times together. We laugh a lot. We pay attention to what each other is doing on stage and so there’s communication there. Micky’s always been a lot of fun.” Tork then shares a warm sentiment on his late friend, Davy Jones, who passed away at age 66 back in 2012. “Who I miss is Davy of course. Davy is the guy who…I’ve always said I loved, liked and respected [the band members] in different proportions but Davy actually kinda got my heart.”

Was their stardom fueled by the success of the Beatles or was it simply because “The Monkees” producers struck while the iron was hot? Tork adds in his two cents, “I was a member of the operation. But when you think about the Beatles, John, Paul, George and Ringo, they were the operation. Everybody worked for them.”

Regardless, the television series and band left a lasting impression on music history and a tremendous legacy for fans. “The Monkees brought long hair into the living room” Dolenz laughs. "The time the show came on the air the only time [before] you saw kids with long hair was when they were being arrested.”

The decade was one of a revolution and Tork points out, “Back in the day, the late 1960s the political administration was in the hands of people who clearly did not give a fig about us- the people who were my age”

He goes on to say, “All they wanted us for was to fire their guns for them. They were fighting wars that we shouldn’t have been in in the first place, that they were fighting for their own ego reasons. So we knew we were on our own. There was no hierarchy that was on our side. What the Beatles did [for music] and what the Monkees did for television was to present a show about young adults with no senior adult figure. The senior adult figure always represented the hierarchy. And we got along [without the hierarchy] just fine thank you very much. That was the great release that the kids who fell for the Monkees fell for.”

These days, these Monkees can be found reminiscing with fans at Comic Cons or touring, as Dolenz is currently doing. In fact, he’ll be in Kent performing at the Kent Stage on April 1. His show comes fully loaded with the hits, stories, some original work, and “a lot of Monkee media.”

You can Meet Peter Tork Friday through Sunday and Micky Dolenz Saturday and Sunday at Wizard World at the Huntington Convention Center of Cleveland. For details and tickets visit wizardworld.com/comiccon/cleveland.