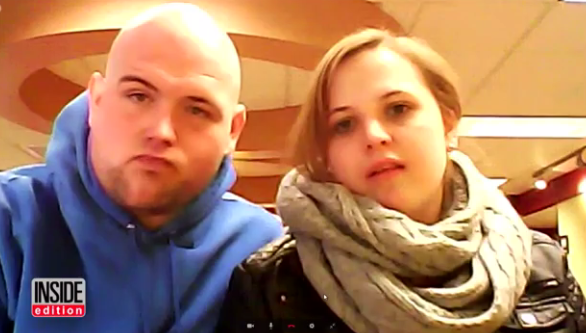 On Monday, Inside Edition interviewed the Sandusky couple who jokingly set up a gruesome homicide scene using ketchup and their bodies and then sent the pictures to at least one family member as a joke. Yes, last week, Micah Risner sent a photo of girlfriend Nataleigh Schlette's dead-looking body in a bathtub covered in ketchup/blood to his sister with a note that he'd killed her. Relatives, horrified at the photo and murder confession, did what anyone would do and called the cops.

It was a joke, which the couple had clearly not thought out all the way, because the cops were not amused and the pair was charged with inducing panic.

“I just thought that it’d be really cool and funny,” Schlette tried to explain to Inside Edition.

At the end of the interview, the couple appeared to understand why the photos were upsetting to some (progress!), but they didn't exactly promise to stop the behavior forever (not so much progress!).

“Definitely like murder scene ones, I’m going to stay away from that for quite a long time,” Risner said.

“Yeah, I don’t think I should use those ideas anymore,” Schlette agreed.