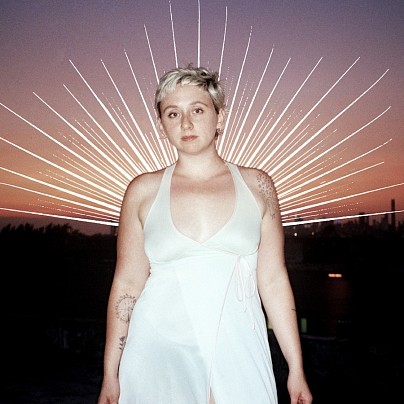 Suddenly, the Philly music scene that fostered and supported Crutchfield’s musical career now became a volatile situation. Crutchfield channels those feelings into her solo debut, Tourist in This Town, an album dominated by synths and pop-driven indie rock songs.

“A lot of this record is how I wanted to move away from Philly, and I really did for a long time,” Crutchfield explains via phone from her Philadelphia home. She and her band the Fizz perform at 8 p.m. on Sunday at the Beachland Tavern. I was so turned off by Philly because it represented a time and place that I was trying to move past and get over.”

Many of the songs are autobiographical in nature and, although it’s a breakup album, the songs never come off as bitter or mean-spirited.

“Now, I’m in a different place with it, and I’m here with a lot of those same people, but we have different relationships now, and we all exist in this place together, and it’s positive,” Crutchfield says. “When you go through a breakup of any kind, you sort of get this burn to do something different for a while, and that’s what this record is for me.”

A whole year of touring with Waxahatchee, the indie-rock project led by her sister Katie, also contributed to her approach on the album.

“I was on tour for so much of the time that I was writing this record,” she says. “I ended a five-year relationship, and my band broke up — so much of my identity was tied up in those two things, and that just ended all at the same time. Whenever you’re going through something like that and you’re on the road, all of the little things that happen to you feel huge. You kind of live your life like you’re in a movie. Everything that happened to me felt significant and like I needed to remember it. So while I was touring, I was taking these diligent notes about where I was, what I was feeling, what I was eating and drinking, who was there — so that really seeped into the record, and became a huge part of it.”

At times, Tourist in This Town feels like it’s bigger than a solo project, like on the distorted and pounding single “Dean’s Room,” or “Expatriate,” which sounds like a lost ’60s girl group tune. However, the album still stays true to the solo formula. Songs like “I Don’t Ever Wanna Leave California” or “Charlie” carry a solitude and reflectiveness one would expect from a solo act.

As a result, the album feels fresh, surprising and different than any of the previous bands Crutchfield has played in. Crutchfield’s reliance on synth-pop complements her soulful voice.

“I think I was driven to differentiate [my project] from Swearin’,” she says. “And synths were the easiest way to do it, because Swearin’ was kind of always anti-keyboard. I wanted to do a songwriting project, so I decided to do poppy synth songs with drum machines and Casiotones. When I started to write this as a solo record, it made sense that I would continue doing that and make it a synth project. I also just really love playing synthesizers, and I worked with a producer who is basically like a synth wizard. It just felt really natural.”

Two other big influences on the record are two of Crutchfield’s favorite musicians.

“The person I look to as my hero and whose career trajectory inspires me is Neko Case, forever. I think everything that she does is amazing. Both her music and her life seem like the life I want,” she says, only half joking. “This goes without saying, and it’s apparent on this record, but I also love Jenny Lewis. She was such an inspiration to me growing up.”

Since Crutchfield always played in other bands, she could hide a little bit from the limelight. Now, though, she’s learned what it’s like to have a higher set of expectations from both the press and from fans.

“It’s difficult to navigate, because it was such a cathartic experience, and it was just no-holds barred talking about how I felt about everything. I really wasn’t thinking about where this record was going to end up, who was going to put it out, who was going to hear it, and how I was going to navigate talking about it to the press or to anybody. So I think that’s been a learning experience,” Crutchfield explains. “I don’t regret it, and I don’t think I’d do it any other way. I think I had to make this record when I made it. This is just the type of songwriter I am. I’m a really confessional person, and I write from that autobiographical standpoint.”

In addition to the press cycle, performing material that’s intensely personal and emotionally loaded can be draining. Crutchfield says that she “never get[s] to the place where I was when I was writing,” but regardless, her goal is “to tap into an emotional place and to be really focused, which is difficult sometimes.”

Like real life, being emotionally present isn’t always easy. “Sometimes I get there, and sometimes I don’t. The cool thing I like about that is that I’m never faking it. If I’m not having a good time and something’s throwing me off — like, if someone’s being an asshole in the back, or someone’s talking the whole time, or yelling at me, it’s gonna be obvious that I’m not faking it. So that’s what’s important to me — to be very real to be myself. It’s not always the best for everyone else, but it’s what’s important to me.”