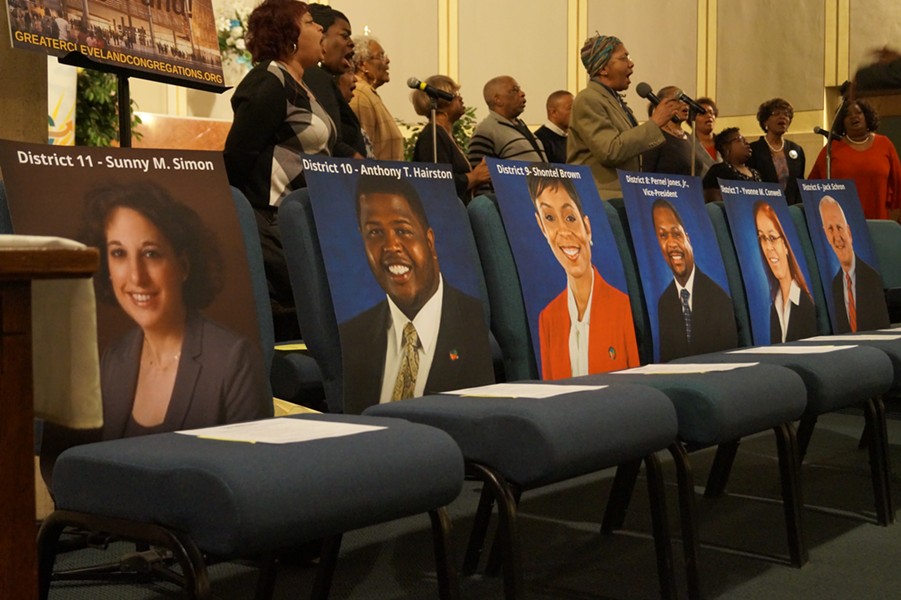 One down, one to go, sayeth the overlords:

The Cavs and their negotiating team can sleep soundly tonight in the comfort that their brazen backroom dealings didn't arouse enough skepticism, or indeed, enough outrage, to weaken the cosmic rubber-stamping power of the county's legislative body. County Council voted 8-3 Tuesday evening to issue the sale of $140 million in revenue bonds that will fund the construction of the Quicken Loans Arena upgrade.

Councilwomen Nan Baker and Yvonne Conwell and Councilman Jack Schron voted no, pleading with their colleagues to "not negotiate from a place of fear" (Baker) and to "wait a few weeks" (Schron).

Many of the councilpeople on both sides of the issue reiterated comments they made at the March 14 meeting. It was clear then that the final vote would be either 9-2 or 8-3. (Conwell was absent).

Pernel Jones voted in support due to inclusion and diversity goals that have been agreed to (at least in principle) by the Cavs. Sunny Simon said she "wholeheartedly" supported the deal because of downtown's vibrancy and workers who stood to benefit from the economic engine of the Q. Anthony Hairston said he'd considered all sides; but he, too, ultimately bought into the economic auto-parts metaphors. The Modell-fear-mongering bozo Scott Tuma said something indecipherable about the Browns parking lot and then averred that the Q itself "is an ambassador."

Council President Dan Brady concluded the proceedings with what was meant to be an inspiring speech, one that had the dual purpose of trying to invert Jack Schron's repeated pleas for patience and caution. Like Cleveland.com, Brady has been annoyed by Schron's probing questions from the get-go. How dare he let fiscal responsibility get in the way of the soonest All-Star Game posible! Tonight, Brady spoke of both the MetroHealth campus overhaul and the arena deal.