The Browns Already Hate Their New Uniforms, Will Probably Have New Ones in 2020, Because Of Course 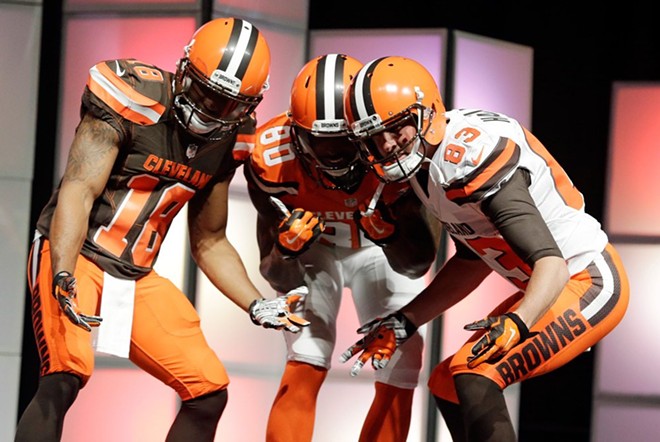 The orange was more orange, or something. Two years ago the Browns threw a weird-ass party at the convention center to unveil their new uniforms, which were almost immediately mocked and panned. From the hue of the helmet to the "Cleveland" on the chest of the home jerseys, there was very little in Nike/Cleveland's redesign efforts that fans liked.

The Browns, in ever Brownsian fashion, are in agreement it seems. Which makes sense for an organization that has faithfully fucked up damn near every decision in recent history and then quickly admitted, in some fashion, to the screw-ups shortly thereafter.

With the owners meetings happening down in Arizona this week there's now confirmation that the Haslams aren't huge fans of the team's current duds and will probably greenlight another redesign in the near future. Some context on when that can happen: Teams are locked into their colors and combinations for five years, so, unless the NFL gives the Browns some special dispensation for seriously embarrassing themselves, we're stuck with the current look through 2020.

What could the future bring? Tony Grossi has some early info/thoughts:

Besides the general busy-ness in some of the nine uniform combinations presently used, Haslam admitted there is a problem with the fabric and the tightness of the jerseys that make them uncomfortable for the players. She said the Browns internally have talked about a new uniform look. “We’ve talked about it, but we haven’t conceptualized what that might be, and we have to work with the NFL on it,” Haslam said. “We’re the Cleveland Browns. We stand for a certain thing. I can’t imagine doing anything too crazy, can you? I can’t.” A source has said that the Browns are seriously looking at replacing the plain orange helmet with a plain white one. The Browns wore white helmets from their inception in 1946 through the 1950 season.

A white helmet, in our humble opinion, would be a stretch. And we're most likely not talking about adding logos — we've long heard one of the requests from Randy Lerner to Haslam when he sold the team was to never add a logo to the helmet. So what does that leave? Another mish mosh of white, orange and brown, all of which will probably be different shades. And it will probably look awful. But hey, at least the Browns don't have a racist red sambo caricature for a logo.