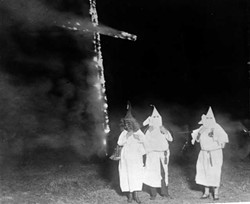 We've reported that loose, decentralized arms of the Ku Klux Klan have been eyeing Ohio for future membership recruitment. With an eight-percent pro-Trump margin in the 2016 presidential election, it's hard not to see the state as fertile ground for fringe ideologues. And even with the reality of Trump policies setting in — the sort of stuff that works against rational self-interest and, like, kindness —  plenty of Ohioans cling to a passion for demagoguery.

And so we arrive at an ongoing investigation in Perkins Township, just south of Sandusky, where detectives are looking into KKK leaflets that were distributed around town, according to the Register. The leaflets bore the name of, yep, the Loyal White Knights.

The leaflet mentions drug and alcohol abuse resources, and it's unclear what other goals were in place with this distribution.

"This is disgusting,” Perkins trustee Tim Coleman told the newspaper. “Someone thinks they can do this? And in Perkins Township? That makes me sick to my stomach.”