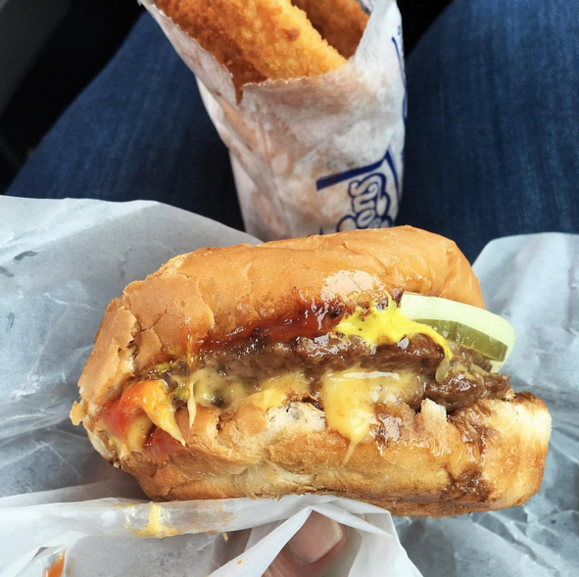 Update: Things are already looking up for 2018. Swensons officially opens its long-awaited location in University Heights on Cedar Rd. (next to Jack's Deli) on Jan. 8. May the new year be filled with Galley Boys for everyone.

(Updated 6/22/17): After much speculation, Swensons Drive-In is coming to University Heights, and could be open within the year.

In April, Scene broke the news that Swensons had plans to open an eighth location, this one in the Cleveland area. Now, with the approval of the University Heights City Council earlier this week, LeBron James' favorite burger joint is officially coming to the east side.

The soon-to-be-built retro-inspired building will sit next to Jack's Deli, at 14510 Cedar Road.

***
(Original Post 4/6/2017):“Service” isn’t often a concept that comes up when discussing fast food restaurants. In fact, the entire foundation of the category is based on reducing labor costs by eliminating servers.

But park your car at any of the Swensons Drive-In locations and you actually will feel appreciated – important even. Quicker than you can roll down the window, a zealous, dutiful and genuinely cheery waiter – here called “curb server” – is at your beck and call, handy with a menu for the rare customer who doesn’t already know what he or she wants.

“White tablecloth-level service,” CEO Jeff Flowers calls it without a trace of hyperbole, despite the fact that customers dine in parked cars.

That level of service, coupled with the quality and freshness of its product, is how this Akron-born institution has managed to survive and grow alongside behemoths like McDonald’s and Burger King. Since Wesley "Pop" Swenson opened his first drive-in, in 1934, the regional chain has grown to seven locations.

But unlike those zippy curb servers – whose official rallying cry is “Sprint and smile!” – the organization does not move quickly. In fact, Swensons has not added a new location since the Seven Hills shop opened in 2001, and there has been zero desire to breach the I-480 boundary.

“We’re definitely working hard to get some new sites open in Cleveland,” says Flowers, a former curb server himself. “We’re slow, we’re methodical, and we’re going to make sure we do things right.”

Flowers says that until very recently, he and Steve Thompson, owner since 1974, frankly didn’t believe that a market for their product existed outside of the Greater Akron area. That changed in July of 2013, when the Swensons food truck first rolled onto the scene.

“We’ve always looked at ourselves as an Akron organization,” notes Flowers. “But when we first put the food truck out, it really became apparent that there’s a strong market for us up there – coming up and doing the Walnut Wednesdays, not to mention the Cavs, Indians and Monsters playoff games.”

If the truck managed to unearth a heretofore silent fan base, it also reinforced the fact that the Galley Boy is by far the most popular menu item – both on the truck’s streamlined menu and the restaurant’s standard one. The twin 3-ounce patties, which are house-ground and hand-formed daily at the company’s commissary, come topped with cheese and a pair of “top secret” sauces. Each bundle of love is swaddled in wax paper and garnished with a toothpick-stabbed olive.

But Swensons’ menu goes well past the Galley Boy. In addition to single, double and triple burgers, there are hot dogs, Sloppy Joe, fried bologna and fish sandwiches. There is also pulled pork, grilled cheese, egg salad and a shrimp dinner, believe it or not, paired with sides like onion rings, fried mushrooms and “potato teezers.” All of the above gets washed down with one of literally dozens of phosphates, milkshakes and soft drinks, including the odd but loveable California and Florida concoctions. The mile-long menu is the antithesis of the modern, succinct fast food roster.

“Quite frankly, the menu might be slightly bigger than it needs to be,” admits Flowers, who adds that having something for everyone has been essential to the brand’s success.

Flowers reports that the organization is actively looking at locations on both sides of town, and it hopes to have something in the works – if not open and serving Galley Boys – before the end of the year. But given the unique nature of the operation, finding ideal spots is more challenging than the typical strip-mall eatery. Unlike most fast food joints, Swensons shuns soulless drive-through windows in favor of the more relaxed drive-in format. And unlike contemporary drive-in chains like Sonic that utilize faceless squawk boxes, they employ living, breathing human beings to do the job. And because every one of those curb servers is a full-time college student, proximity to universities is key.

Thanks to schools like Cleveland State, John Carroll, Baldwin Wallace and Case, Cleveland is ideally situated for multiple locations, Flowers admits, but given the company’s history of measured expansion, we shouldn’t expect a spate of openings.

“I’m excited for the opportunity to show more than Akron what Swensons is all about,” says Flowers. “Hopefully we can get another couple restaurants open in Cleveland, but we’re not going to damage the brand. There’s too much that is important and that has allowed Swensons to be around for the last 83 years to duplicate like wildfire.”